Many of you may be using our country’s sprawling network of highways to visit family and friends during the holidays this year. America’s highway system is an impressive feat of which we should be proud. It has brought the far reaches of this land, and its people, closer together.

One day, my 1-year-old son, Oscar, may use those same highways to visit me, but I hope he has other options, too. I hope he lives in a world where transit is one of them. And not just because I design transit infrastructure, but because of why I design transit infrastructure. I am what some would call a “plangineer.” That is to say, I am a planner and an engineer — and I choose to work in transit because of the sustainable value it brings to communities and individuals.

I want my son to know and appreciate the diversity of experiences within our country and around the world. I want him to be worldly. I also want him to be friendly. I don't want him living in a bubble. Transit brings together people of all backgrounds and walks of life, and helps us meet other members of our communities and feel more connected to them. It helps create a sense of belonging we all crave.

Transit is also good for the environment. While it’s bringing people together, it’s also consolidating them into fewer electric-powered vehicles — thereby reducing greenhouse gas emissions. Its infrastructure also reduces the amount of real estate we need for freeway off-ramps and parking structures.

That frees up space for restaurants, hotels, stadiums, storefronts and parks. Transit attracts walkable growth adjacent to its route and stations. It encourages compact, mixed-use and smart development.

Transit stimulates the economy, and you don’t need to be a transit engineer to understand why. During Oscar’s first year (he turned 1 on Nov. 17), he attended several transit grand openings with his father and me. It won’t take long for him to see the connection between transit and the development that follows.

Transit also often links underserved communities to opportunities by providing affordable transportation to jobs, healthcare and education. And transit creates jobs before, during and after construction, including those created by the new businesses that materialise around stations.

I want my son to grow up in a world where more people take transit, connect to their neighbours, care about the environment and feel they contribute to society through their work. It was encouraging to celebrate his first birthday and realize how many sustainable transit projects HDR has been part of, even within this past year.

Oscar will be at openings for many more projects in the years to come. It will be one of our fun traditions that we can enjoy as a family that will hopefully instill in him the values inherent in sustainable transportation. And later in life when he visits for the holidays by way of a rail transit line that I may have helped plan or design, perhaps he will reflect on its power to build communities while improving the quality of our lives.

Photo caption: HDR’s Seattle-based Transit Engineer and Planner Gina Thomas and her 1-year-old son, Oscar, celebrate the opening in late September 2016 of Sound Transit’s Angle Lake Link light-rail extension, which HDR designed in partnership with VIA Architecture. The station was designed to be the first Leadership in Energy and Environmental Design (LEED®)-certified transit station in the State of Washington. 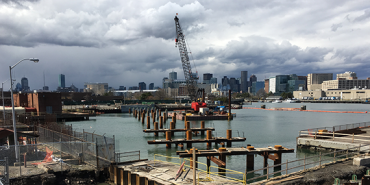 Getting Sustainability on the Right ‘Track’