Leveraging Design to Maintain Safety and Security for Staff, Detainees and Visitors

The fundamental goal of every jail is to maintain safety and security for staff, detainees, and visitors. Assessing each detainee’s risks and needs and effectively managing detainee behaviour is critical to achieving this goal. There are a number of critical ways in which the physical plant, or architecture, can help support the best practices in detainee behaviour management.

Shifting from Containment to a Holistic, Outcomes-Focused Approach

In the past, jails sought to control detainees solely through physical containment – locks, bars, steel doors, security glass, and alarm systems. Staff safety was believed to depend on maintaining physical barriers between staff and detainees.

Without staff management of detainee behaviour and detainees left to their own devices inside cellblocks, problems such as violence, vandalism, and lack of sanitation became so common that they seemed inherent to jails. These problems inevitably become costly to their communities through litigation and staff turnover.

Over the past 30 years, jail practitioners have learned that control of the jail can be established through effective management of detainee behaviour. Much of that knowledge is based on the experience of jails that use direct supervision paired with a behaviour management philosophy and specific jail design — conveying an expectation of positive detainee behaviour, facilitates staff interaction with detainees, and promotes management of behaviour. In direct supervision jails, staff is positioned within detainee dayrooms with no physical barriers separating them from the detainees. This means that staff is able to interact extensively with the individuals and provide continuous supervision.

If detainee behaviour is managed effectively and emphasis is placed on an outcomes-focused approach, jails can be an engaging workplace for staff, a safe and restorative environment for detainees, and a valuable asset to the community.

Inmate Behaviour Management (IBM) was developed by the National Institute of Corrections, U.S. Department of Justice (Virginia Hutchinson 2009). Once established, these six elements, function as an ongoing, integrated process designed to generate, as well as foster, positive detainee behaviour.

The first element is to gather information on the risks and needs of each detainee:

The assessment lays the foundation for the detainee’s individual behaviour management plan and the information gathered is used to classify the detainee.

To enable staff to manage a detainee’s behaviour more effectively, the individual should be assigned to appropriate housing according to the housing and classification plan. Typical information and decisions made about the detainee include:

There are several housing classification systems available to jurisdictions. One such system is the Northpointe[1] model, which is used by many jurisdictions throughout the country including Kent and Washtenaw Counties in Michigan and Franklin County, Ohio. This system, developed by the Northpointe Institute for Public Management, Inc., divides the jail population into nine classifications. The classifications are determined by an assessment of the person’s charge, offence history, prior institutional history, and behaviour among other things. Based on this assessment a person is assigned a classification and housing assignment.

Under this system, individuals with a classification of 1 or 2 are considered to be the highest classification based on their risk factors and they would be assigned to the most restrictive housing. This would likely be an assignment to a single-occupancy cell with limited out-of-cell time in classification 1 and more out of cell time as a detainee steps down in classification 2.

Detainees’ basic needs are the same as all human beings. There are physical needs such as food, water, protection against the elements, adequate warmth, physical exercise, medical care, and adequate personal and environmental sanitation. There are safety needs such as protection from harm and assault and hazardous environmental conditions. And finally there are social needs such as maintaining contact with family and friends and the opportunity to have positive interactions with others. These needs are based on the work of psychologist Abraham Maslow who developed the hierarchy of needs (A.H. Maslow 1976).

All human beings seek ways to meet their basic needs. If the jail does not provide these needs, detainees will find ways to meet them on their own terms. A jail that allows this to happen, it will hand over a significant amount of control to the detainees. For example:

Historically, jail staff have expected detainees to be uncooperative, destructive, aggressive, violent, and manipulative. Over the past 25 years however, it has been demonstrated that jail staff can influence detainees to behave positively within the jail by setting and expecting high standards for maintaining high levels of sanitation, rule compliance, treating staff with respect and interacting positively with one another.

The jail should not only define what is expected of detainees, but also ensure that they have the means to comply. For example, if the expectation is that housing units are to be clean and orderly at all times, then the jail will need to supply sufficient cleaning supplies and equipment.

Information on behavioural expectations should be part of each detainee’s orientation to the jail. The jail should give each new detainee a copy of the detainee handbook or access to an audio or videotape when he or she is first admitted to housing.

The indirect or subtle messages the jail gives detainees about expectations for behaviour are as important as its formal message. For example, the jail’s physical plant itself conveys a powerful message about expected behaviour. Most jails were built on the premise that detainees are violent and dangerous, ultimately conveying this expectation by equipping detainee areas with virtually indestructible fixtures and furnishings. In such jails, the message conveyed by the physical plant is we expect non-compliant and destructive behaviour.

If, however, the jail’s physical environment conveys a positive message about behavioural expectations that is aligned with the formal message, this will set a tone for positive behaviour.

Most people who enter the jail have had some history of trauma. For example, 77-90% of incarcerated women report extensive histories of emotional, physical, and sexual abuse and up to 80% of men (in some studies) have histories of trauma (Falcon, 2019).

In addition to using the physical environment as a tool to set expectations, the environment can also have a calming effect on mood and attitude of detainees who have experienced trauma by using principles of Trauma Responsive Design. These principles include:

The use of colour is also important. Institutional grey and white should be avoided as should warm colours such as red and orange as these have a tendency to cause agitation. Instead, cool colours such as blue, green, and purple should be used for their calming effect.

The fifth element of IBM is supervising detainees to hold them individually accountable for their behaviour. To do this, the staff must interact with the detainees. Staff interaction with detainees should have a clear purpose: to obtain positive detainee behaviour, namely, compliance with jail rules to achieve the goals of the behaviour management plan.

Staff must be able to detect and solve small problems before they become crises. They should be able to devise strategies to ensure that the detainee’s housing unit is safe, clean, quiet, and orderly and then determine the effectiveness of these strategies through inspection and documentation. Each staff member must serve as a positive role model for detainee behaviour and establish himself or herself as the person in charge of the housing unit by demonstrating knowledge of jail policies and applying supervisory skills.

The sixth and final element of IBM is keeping detainees occupied with productive activities that focus behaviour on the positive instead of the negative. Jail staff can keep detainees productively occupied in the following ways:

At a more fundamental level there are compelling behaviour management reasons to provide detainees with productive activities. When the jail provides structured activities, it controls the nature of the activity and assures that it contributes to the overall goals of the behaviour management plan.  If the jail does not provide detainees with productive activities, they will find ways to fill their time, often through activities that are destructive and contrary to the jail’s mission of providing a safe and secure environment.

Smart Justice: At the Intersection of Behavioral Health and Corrections
Article

First Impressions: Designing for Impact within the Correctional Setting
Article 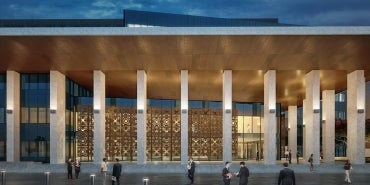