During times of increasingly scarce supplies due to drought, water suppliers in Texas are continually faced with the challenge of meeting the needs of a rapidly growing population. As the development of new water sources becomes more costly and difficult to permit due to their limited availability, providers are forced to make every drop count. New water management strategies are increasingly more complex, requiring tapping into multiple sources including surface water, groundwater and developed water (such as treated effluent). Water suppliers across the state now face the daunting problem of managing separate water sources and complying with associated permit conditions while not impacting other water rights holders.

The administration of water rights in Texas is dependent upon the source of water. Groundwater adheres to the rule of capture and is regulated by local groundwater districts. Surface water originating from rainfall runoff is considered property of the
State and is subject to a permitting process based on the prior appropriation doctrine, which simply stated means “first in time, first in right.” Treated effluent is considered property of the entity treating it. However, once groundwater or treated effluent is discharged into a stream, it becomes property of the State and is subject to the same permitting process as surface water. Texas follows the prior appropriation doctrine – again based on the principle of “first in time, first in right” – in the administration of its surface water rights. The Texas Water Code requires a user to hold a permit to divert, store, or beneficially use surface water owned by the State. The permitting process for surface water rights in Texas is administered by the Texas Commission on Environmental Quality. A new appropriation of state water may only divert or store unappropriated water and must not impair existing senior water rights.

TCEQ considers unappropriated water to be the amount remaining in the stream after subtracting the State water already appropriated to other permit holders from the naturally occurring flow (natural flow). TCEQ utilizes the Water Rights Analysis Package to model surface water availability in the state for the various basin-specific Water Availability Models. As a result of Senate Bill 1 approved by the 1997 State Legislature, TCEQ was charged with developing tools to determine surface water availability and to evaluate new applications to permit state water. This effort resulted in the development of 20 different WAMs covering the 23 major river basins in Texas. These models estimate the natural flow that would have occurred in all of the major river basins in the state, with natural flow being defined as the flow in a stream removing any anthropogenic effects such as reservoirs, diversions, and return flows. The period of record for most of these models begins in the early 1940s and ends in the late 1990s (period of records vary slightly among the individual river basins).

TCEQ now uses these models to determine the reliability of existing water rights and evaluate requests for new appropriations. The models calculate diversions, storage and regulated (appropriated) and unappropriated (water available for diversion) streamflows. HDR and others use these models throughout the state to determine the unappropriated flow available for a new appropriation, water supply reliability of existing rights, and water supply planning purposes.

WAMs are used to determine the amount of available water for a new appropriation, but they are not used for operational purposes. In order to protect existing water rights and the environment (via environmental flow requirements) after a new appropriation is granted, a water accounting tool must be created and approved by TCEQ, which then becomes part of the new water right permit or amendment. Accounting plans are generally created in spreadsheet format and accompanied by text describing the new authorization, fields included in plan, and associated calculations. Daily data is generally input in the spreadsheet by operators in the field, and calculations are performed that inform operators how much water may be beneficially used by the right that day. The accounting plans are to be made available to TCEQ upon request to ensure compliance with the water right permit terms and conditions.

As newly developed water management strategies become more complex, so do the associated water right permits and accounting plans that accompany them. A single reservoir may have multiple permits owned by separate entities with authorizations to store and divert different sources of water at varying priority dates. Additionally, environmental flow criteria associated with new permits have become more complex, and permit holders have become more dependent on accounting plans to verify compliance with these permit provisions.

HDR has authored many of these accounting plans. One of the more interesting and complex plans was developed for the City of Dallas and its Lake Ray Hubbard Permit. Lake Ray Hubbard is located on the East Fork of the Trinity River on the eastern edge of the Dallas-Fort Worth metroplex (Figure 1). The City of Dallas owns and operates the reservoir, and supplies are used to meet the retail and wholesale needs of its customers. Dallas is authorized to impound up to 490,000 acre-feet of water in Lake Ray Hubbard and to divert and use up to 209,700 acre-feet per year for municipal, industrial and domestic uses at multiple priority dates. This permit has been amended nine times since inception. As one can imagine, the accounting plan is as complex as the permit itself. The most recent amendment allowed overdrafting the reservoir above the annual firm yield amount contained in the WAM, which provides Dallas with significant operational efficiencies.

Over the last 50 years, the Lake Ray Hubbard watershed has undergone significant urban development, resulting in increased runoff from rainfall due to the increase in impervious cover. The increased runoff has significantly augmented the amount of natural flow originating in the watershed and has therefore increased the amount of unappropriated flow into the reservoir. A significant portion of this development occurred after the WAMs were adopted in the early 2000s. As a result, the increase in natural and unappropriated flow is not recognized by TCEQ or included in the WAMs. In 2005, Dallas partnered with HDR as its consultant to pursue amending the Lake Ray Hubbard water right permit to appropriate this additional water.

The latest version of the accounting plan was a product of the most recent amendment. It includes more than 80 columns of data spread out over six sheets with over 13 daily operator inputs. The plan includes logic statements that alert operators when permit values are exceeded or minimums are not met, such as passing inflow to meet environmental flow conditions. Complicated as it may be, the accounting plan is designed to be straightforward to the operator entering the data and checking for compliance with permit provisions.

Before the amendment could be granted, the accounting plan had to be updated for the additional diversions under the junior priority, in addition to accounting for diversions made under the original 1955 priority of the permit. The plan had to be able to track diversions under the two priorities and calculate unappropriated inflows into Lake Ray Hubbard for each priority separately. In order to address this issue, the concept of a virtual reservoir was included in the accounting plan. The virtual reservoir simulates what the lake storage would have been without the additional diversions allowed under the new amendment. In other words, the actual lake storage reacts to both the 1955 and new junior priority diversions, while the virtual lake storage is simulated considering only the inflows and evaporation that would have occurred with only the 1955 priority authorizations in place. If the virtual lake storage rises above the operational maximum water surface elevation, it indicates that actual inflows would have begun to flow downstream without the 2008 priority diversions in operation. Inflows impounded under this condition are recorded as 2008 priority inflows, which are subject to downstream senior water rights and environmental flow standards.

In 2016, after a lengthy permitting process, a new amendment was granted authorizing Dallas to divert an additional 119,600 acre-feet of water annually from Lake Ray Hubbard in addition to the 89,700 acre-feet annually authorized in the original permit, subject to the permit provisions and the operations of the accounting plan. The additional supply allows Dallas to meet the future needs of its customers without having to develop a completely new supply source with large and costly infrastructure. Furthermore, the additional diversions give Dallas the flexibility within its system to meet peak day demands even if one of its other supply sources becomes unavailable in the event of an emergency.

On many occasions, TCEQ has referred to the HDR-developed accounting plans as the “standard” that other permit holders should consider in design of its own accounting plans. While not literally a bar code on every drop of water, the accounting plans are a significant leap forward in accountability for water rights holders across the state. 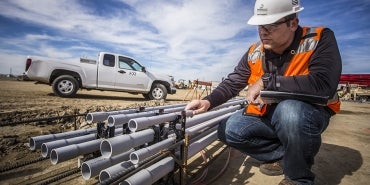 ENR Highlights HDR’s Role in EchoWater Project
In the Media 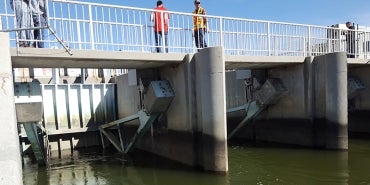 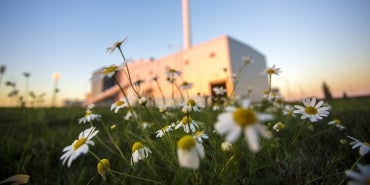 Waste to Energy: The Environmentally Responsible Waste Solution Overlooked in the U.S.