Perspective: Towards a Green Future for Architecture

A recent panel discussion hosted by the Northeastern University Energy Systems Society focused on how the construction sector, which is a massive energy consumer, needs an overhaul.

Panelists, including our Sustainable Development Director Colin Rohlfing, explored how architecture can move past net-zero emissions and be part of the solution to the growing climate crisis. I found the discussion, “Sustainable Architecture: Designing a Green Future,” to be very insightful. Below, I have summarized my two key takeaways from the conversation.

Reflecting on how natural gas was a bridge from fossil fuels, panelists emphasized that the time is now to transition to electrifying buildings. Of course, that path has significant challenges.

One major concern, noted by multiple panelists, is simply the perception of electrical systems. In some places, HDR is recommending all electric for utilities, such as Toronto and Vancouver, where full electrification is the end goal. That isn’t the case everywhere, though. As the host was based at Northeastern University in Boston, he and other panelists noted that in this region of the country, both residential and commercial property owners are reluctant to go fully electrical due to the cold winter climate. The perception is that gas-heated buildings perform better in winter weather.

Changing this perception will be paramount as heat pumps have proven to be a viable option and the cost is slowly falling, and as one panelist said, could see a drop in price much like photovoltaic panels have dropped in the last 20 years.

Another concern is the increased load on city power grids, as electrifying buildings will place even greater stress on systems, especially with the growth in electrifying transportation. Some grids don’t have the state-of-the-art technology to handle the increase, but as some panelists noted, that capability can be achieved with significant capital investments.

The decision also falls on officials and those in charge of development, as they face the conundrum between gas infrastructure or electrical infrastructure.

To that, one panelist said, we need to decide: do we spend 50 years re-doing gas infrastructure or 50 years upgrading electrical infrastructure? As government policies dictate those decisions, it’s important to push electricity now, which leads to the second takeaway.

How to Push for Sustainable Buildings

All of the panelists emphasized that a silver bullet doesn’t exist to fix these issues, as it’s clear that sometimes these calls fall on deaf ears in the government or with big corporations that are responsible for major carbon emissions.

But panelists discussed ways to affect change from a more human, emotional perspective. For example, people moving into buildings are now asking landlords about sustainable initiatives in the buildings, and younger people interviewing for jobs are asking companies about their sustainability values and actions.

Those ideas framed the perspective that we, whether we’re tenants, students, engineers or architects, need to start demanding that a commitment to sustainability is part of what we do, how we work and where we live.

Another panelist suggested we take a step further, not just focusing arguments on an efficiency framework of costs and ease of operation, but moving toward a dignity framework, where people demand these changes for the betterment of the world.

It’s clear that what we need is a defined, proactive strategy so that what doesn’t happen, as one panelist posed, is that a change is only made after a disastrous event or imminent threat that causes people to wake up and mobilize.

Dominick Roveto, AIA, LEED AP, NCARB is principal for our education, science and advanced technologies practice in Boston, where he helps establish and guide the overall direction of the sector in the New England region. 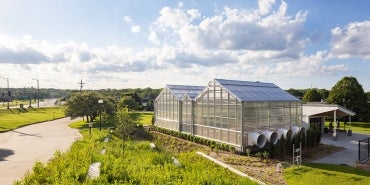 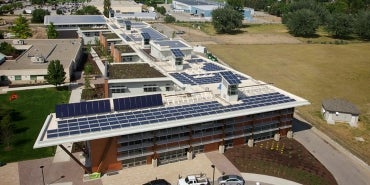 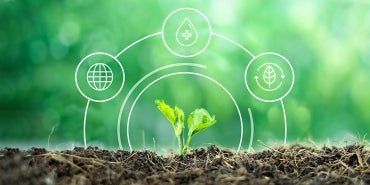