What Makes for a Good STEM Workroom?

I coached a high school robotics team for seven years. 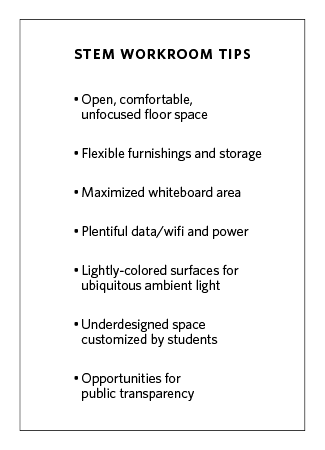 After scraping by in my garage and living room for a few years, our team was finally granted access to a windowless, filing room at school for programming and driving practice. We were grateful. Two years and one world championship later, we were given a spare classroom of our very own. This meant students could start work as soon as the final bell sounded, and as a result, our roster quintupled.

The room was perfect, sort of.

It had space enough for designing, building, programming AND driving. Its only set of keys was in the team’s possession, affording students the luxury of leaving their work in a state of suspended animation, ready for resumption the following day. And its floors, walls and ceiling were white, with big windows, allowing the flexibility to work anywhere in ample, ambient light. But it didn’t have any transparency from the hallway, so student peers were oblivious to the engineering, engagement and fun they were walking past. And most importantly, it only had one whiteboard... 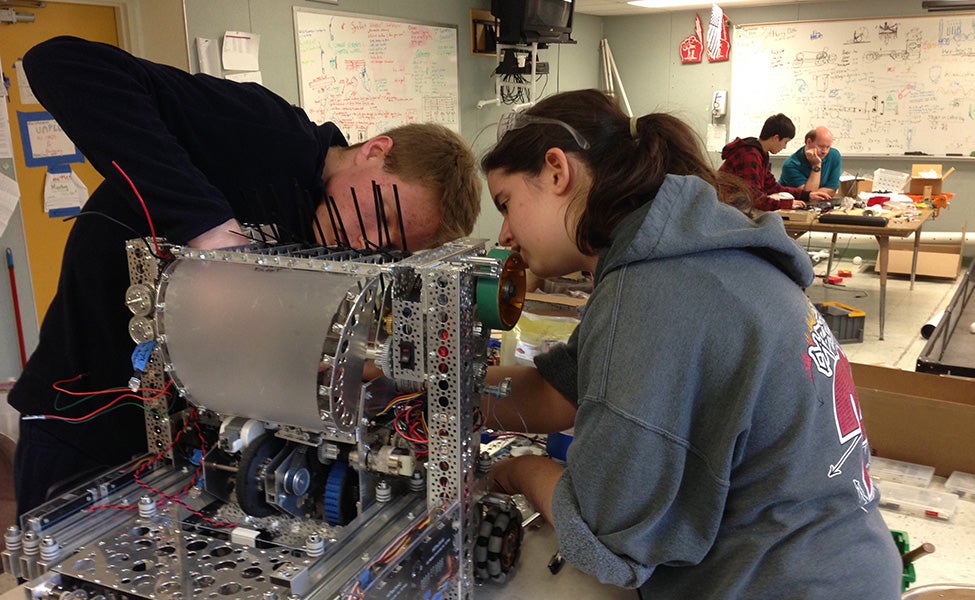 Our whiteboard was our primary collaboration tool, irreplaceable by any other medium of communication. It was big, public, imprecise and required no special skills to operate. One field of view contained a month's worth of ideas and revisions. Whiteboard sketches also were neither precious, nor destructive, encouraging students to add on to another student’s idea without obliterating the first. Certain CAD technologies and large monitors have achieved some of these qualities, but only partially. On Day 1, rookies, if they had the courage to suggest a robot idea, were horrified when they were handed a marker and shown to the front of the room. But one look at their new teammates’ faces revealed only eagerness to hear their ideas, not an opportunity to humiliate them. 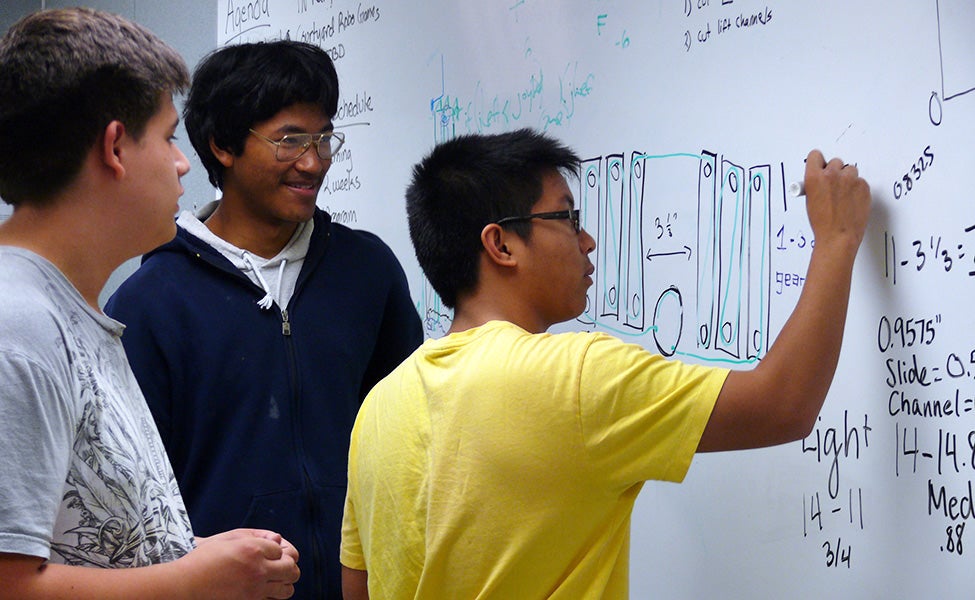 Our room was wide-open, providing a blank canvas for students to tailor their environment to how they thought programmers, builders, drivers and CAD modelers* should work; how the team comes together for “teaching moments”; and how visitors are engaged. They thought about how to organize their stock parts and materials, mostly in scores of donated shoe boxes, so they didn’t waste half their day hunting. In our case, the room was truly a blank slate for the first year, devoid of chairs or stools. Surprisingly, when chairs finally did arrive, most of the students preferred the floor. Who would have thought to design it like that? This should be a lesson to any designer of rooms intended to foster design: DON’T OVER-DESIGN IT. Doing so robs students of a wonderful opportunity to design and make the space their own. 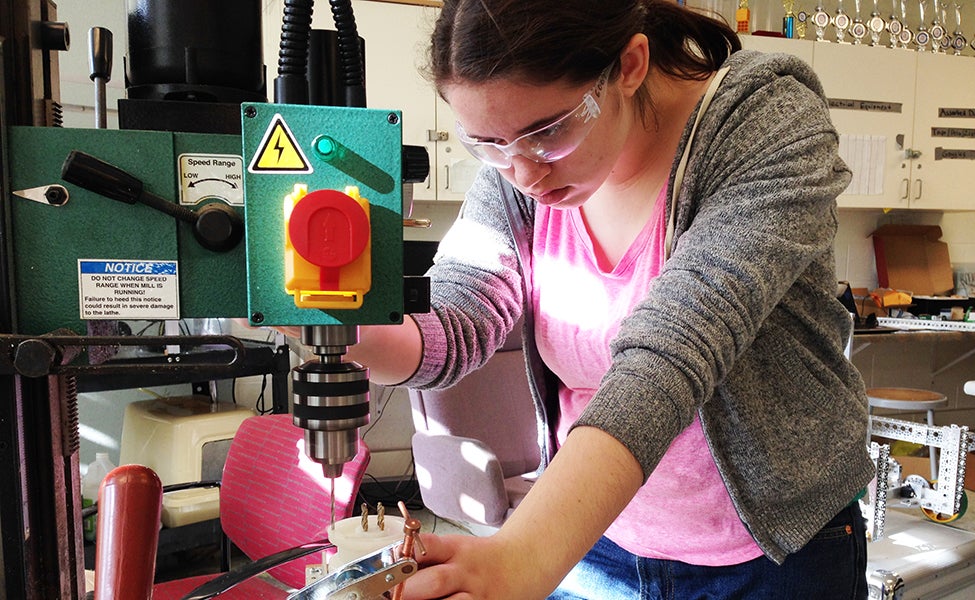 What metrics correlate with high performing STEM workrooms? If the purpose of a workroom is to foster a hands-on exploration of STEM phenomena, and to develop personal and collaborative design skills, then the amount of time spent in the room tracks remarkably well with outcomes. I’ve seen this both on a personal and team level. The students that invested the most time excelled beyond their peers. The teams that invested the most time had the most knowledgeable team members and performed the best at tournaments. There is no short-cutting time when it comes to project-based learning. This should come as no surprise to designers of STEM workspaces: that’s exactly how architectural design studios work. The more we made it our home, the more we wanted to be there, and the more we got out of it. The same goes for STEM workrooms. 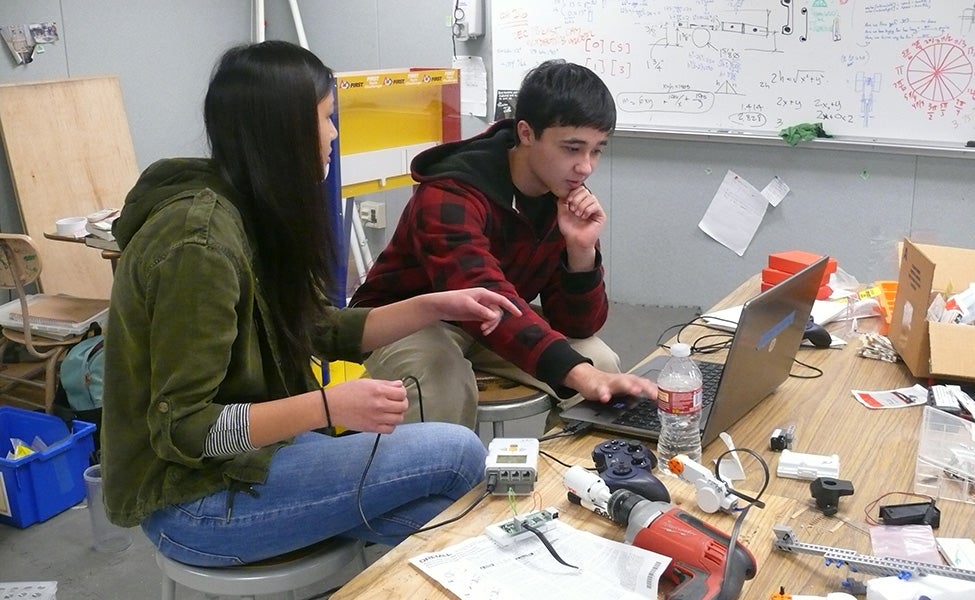 I’ve seen countless examples of “state-of-the-art,” project-based STEM workrooms, and most look like nightmares to me. So, what makes a good STEM workroom? I would tell anyone who asked, “A bright, open, customizable room, available at all hours, with power, data and absolutely EVERY SINGLE SURFACE covered in whiteboard.”

* STEM note: regardless of role, everyone on the team designs. 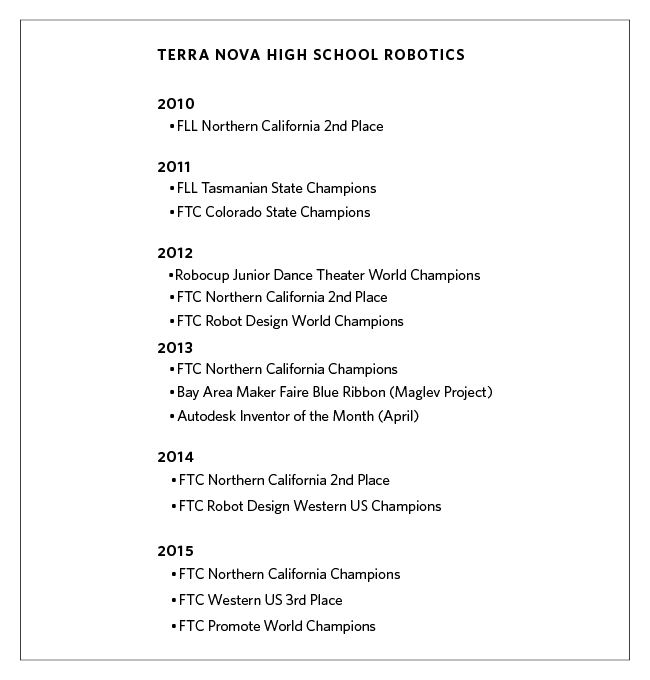