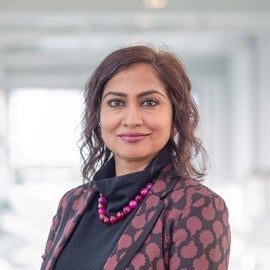 As the transit lead for Canada, Shangeeta’s primary mandate is to provide leadership for us in Canadian transit, including finding creative ways to provide client services. She leverages strengths strategically, both internally and externally, and hires the right talent. Since joining us, Shangeeta established Canada’s own rail and transit systems department. She has also expanded transit engineering with new project management and technical expertise.

She is passionate about public transportation (trains in particular), sustainability, people management and mentoring, working in a team with dynamic people, as well as learning and gaining new experience. What excites her most is finding new and creative ways to deliver optimal, quality solutions for us, clients and the public.

Shangeeta is a member of the Toronto Railway Club and the Project Management Institute. Shangeeta holds the post of secretary on the board of directors for the WTS Canadian Educational Foundation. Active in the industry, she presented at the Canadian Urban Transit Research & Innovation Consortium conference in 2020 and 2021.