How AET Continues the Trend Toward More Efficient Roads

As electronic tolling technologies have developed over the last decade, transportation professionals are seeing a switch from manual toll collection to all-electronic tolling collections. In addition, variable pricing is encouraging more efficient use of the transportation infrastructure by shifting demand to alternate modes and routing trips to less congested times of the day.

Phil Riggio, P.E., focuses on the emerging transportation technologies that are facilitating these changes. We asked him four questions about the advancements taking place in AET for managed lanes and toll roads.

Riggio serves as transportation technology Northeast section lead in our advanced technologies for surface transportation practice. He has three decades of expertise in applying technology to solve surface transportation problems. Riggio recently served as the ITS and tolling lead for the 8-mile reversible I-395 Express Lanes preliminary design extension to the District of Columbia and provided quality control for the preliminary design and design-build technical requirements for the 10-mile reversible I-95 Express Lanes extension to Fredericksburg, both in Virginia through a public-private partnership between Transurban and Virginia Department of Transportation. Riggio also served as the ITS and tolling lead on the New New York Bridge/Governor Mario M. Cuomo Bridge replacing the Tappan Zee Bridge. This project installed the New York State Thruway’s first AET system. In addition, he assisted Alabama Department of Transportation in developing technical requirements for ITS and tolling systems for the new Mobile River Bridge in Mobile, Alabama. In February 2019, Riggio graduated from the 12th annual Leadership Academy, an executive development program for the toll industry that is sponsored by the International Bridge, Tunnel and Turnpike Association.

Q. AET is gaining in popularity and becoming widely deployed. What are some of the benefits and expected challenges that operators experience when transitioning to AET?

A. A major benefit is that the transition to AET provides the opportunity to increase toll tag penetration and collect tolls more efficiently. Some agencies, despite having electronic toll collection programs in place for over a decade, still have seen substantially higher penetration rates when upgrading their systems to AET.

Another benefit is that operators can eliminate the time and costs of processing cash transactions, and eliminate the security required to handle cash. On the other hand, the transition to AET initially can create an increased workload in the back office due to drivers who either previously paid in cash or didn’t open a video- or tag-based account prior to the AET changeover. Depending on the specific operator’s policies, these transactions are then processed as violations, at significantly more cost-per-transaction to the operator, and result in a higher toll paid by the user. Needless to say, it’s desirable to minimise such cases. A widespread public outreach campaign is recommended to notify users of the change to AET and what it will mean for them.

Other benefits we expect of AET include reducing stops and delays, and increasing traffic throughput and speeds. Traffic operations can improve greatly at the gantry location after AET replaces a traditional toll plaza. However, one can be the victim of one’s own success. The operator should plan for how these increased volumes and speeds will impact traffic operations at locations downstream of the AET gantry, and consider signing/striping changes or targeted ITS deployments to address issues such as queuing, unsafe lane changes or oversize vehicles. One example would be to install overheight vehicle detection and warning systems in advance of a tunnel that has transitioned from a staffed toll plaza (which also served to filter out these vehicles) to AET. We recently designed one such system for Metropolitan Transportation Authority Bridges and Tunnels in New York City. Currently in construction, the completed system will identify the vehicles on the tunnel approach, trigger messages notifying them to divert, follow up with confirmation detection to determine if they did not divert, and if that is the case — transmit alarms to tunnel operations staff, send additional messages to the drivers and turn the tunnel portal signals red. We also have developed a concept of operations to perform similar functions in a more targeted manner by using connected vehicle technology.

Q. What are the design, construction and operational challenges for implementing AET on managed lanes versus on traditional toll roads or bridges?

A. Managed-lane systems must deliver services beyond those of a traditional toll road or bridge, and do it in a more challenging environment. Toll rates can change based on real-time traffic conditions, and drivers must be informed of the prices at locations that let them make smart route choices. If the roadway is a high-occupancy toll facility, then other systems and roadway features are required to detect vehicle occupancy violations and enforce these restrictions.

Some of the challenges with managed lanes are due to simple geometry. These lanes are often installed in the median of an existing urban expressway, so there is little space to install the needed utility duct banks, toll gantries, redundant communications, backup power generators and fuel tanks; or the access areas for the people and equipment needed to successfully maintain the field devices and refill tanks. During design, this may require developing new custom details and special provisions, as well as coordinating with the general purpose lane operator regarding sign messaging and sharing of sign structures. On the I-395 Express Lanes in Virginia, we minimised the footprint of structures by installing the pole bases within barrier bulb-outs, and installed the conduit duct bank under the express lane’s paved shoulder, with offsets to boxes placed in the barrier. During construction, restricted access to these median locations must be considered.

Other challenges are institutional. For example, Transurban is the managed lane operator for the express lanes system in Virginia, while VDOT operates the GP lanes. In similar situations, where the managed lane operator differs from the GP operator, the two must still closely coordinate. Algorithms that calculate price may require real-time data from GP lanes. Signs displaying toll prices tend to be placed up to 2 miles (3.2 kilometers) in advance of a toll road entrance, requiring placement on the GP lane operator’s right-of-way. Managed lane and GP lane operators must agree on a policy to share or separate their respective infrastructure components. 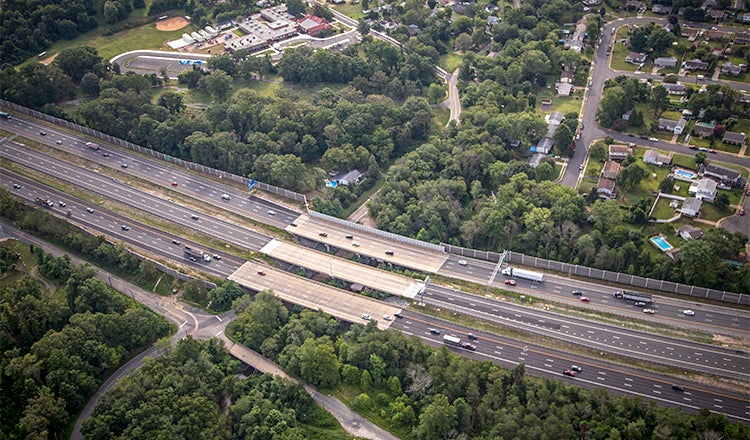 Q. When variable pricing is used as a tool to manage traffic congestion, does this blur the line between traffic management systems and tolling systems?

A. Historically a tolling system was the primary solution to pay for the roadway or bridge, and ITS was the application used to manage traffic congestion and provide traveller information. But there always has been substantial “line-blurring” between the two systems’ technologies. The same or similar hardware is used in both tolling and ITS applications, including vehicle detection, vehicle classification, CCTV cameras, video analytics, lane-use signals, local area networking, low-voltage power distribution, workstations and servers. Additionally, when the same entity owns both systems, the power services and trunk- or wide-area network communications may be shared. Using toll tags to measure travel time on non-tolled roadways has been done for decades. Both systems use similar public-agency procurement mechanisms. Despite these similarities, in terms of management within the public agency and day-to-day operations and maintenance, the two functions were separate. This distinction was due to tolling-specific needs (e.g., the security system in place around toll accounts to protect users’ personal information; physical security associated with any cash collections; much higher standards for tolling system performance and availability than for ITS systems; and the need to audit toll transactions).

Managed lanes and congestion variable-pricing strategies further blur the line between what was traditionally called ITS versus tolling. As managed lanes and congestion pricing projects become a tool for toll agencies to manage traffic congestion and improve mobility service on their road facilities, convergence of ITS and tolling technologies has become a dominant trend in the tolling industry. The traditional ITS equipment is now critical to the tolling operation. With managed lanes, the system performance and availability of ITS components (e.g., detection on GP lanes and variable message signs which display variable toll rates) must be just as high as AET components, such as the violation enforcement system.

Q. As we plan for a future with connected and automated vehicles, what potential challenges must tolling agencies address?

A. Tolling technology has evolved over the years. We’ve gone from those fun coin and token basket receptacles that were around when I was a kid to electronic toll collection supplementing cash transactions at staffed toll plazas. Today we have the latest AET with multiprotocol readers that simultaneously read different types of toll tags and high-speed video cameras that automatically capture and process high-resolution images with 99.9% accuracy. We can safely say this technology will continue to evolve.

When CAV technology is built into cars and trucks, whether using dedicated short-range communications or cellular vehicle-to-everything, also known as CV2X, it can eliminate the need for separate toll tags. CAV technology holds the promise of closer spaced vehicles, narrower lane widths and potentially variable lane assignments. Any of these changes will have a major impact on today’s state-of-the-art toll gantry system, which is based on distinct lanes and requires space between vehicles to read license plates. Currently some vendors are coming to market with a mobile payments approach for tolling, which relies on cellular technology and eliminates the need for toll tags. None of us can see the future, so any planning for future CAV impacts should take multiple adoption scenarios into account. Just as the first ETC shared a staffed toll plaza with cash transactions or token baskets, there most likely will be a significant transition period where CAVs share the road with human-driven vehicles. During this transition, we should expect today’s state-of-the-art AET approach to work in parallel with future tolling methods.

Q. What inspired you to focus your career on using technology to improve transportation?

A. Like many engineers, I liked to build things growing up — to create something from scratch. Once in the workforce, I got involved in supporting a 24/7/365 operations and maintenance contract for a major ITS program. I was proud that we were building something that didn’t exist before and enjoyed the team spirit within our group that was responsible for the program. So I stuck with it. Later I got my P.E. license and moved onto other aspects such as systems engineering and design, and eventually got involved with tolling projects. The fun part is how the technology keeps moving forward, often driven by outside industries. This keeps us on our toes and ultimately makes it easier to deliver services to travellers.

Q. What advice would you offer to new professionals in the transportation industry who will work with electronic tolling technologies?

A. First, I expect tolling will continue to grow as it expands its role into congestion management and gas-tax revenue replacement functions. This growth will bring more opportunity for professionals. Next, keep in mind that there is no undergraduate or graduate degree in tolling. Tolling industry folks, like their counterparts in the ITS industry, come from varied backgrounds. AET programs require a broad spectrum of professionals performing a diverse set of functions. A modern AET program requires not only engineers, but also lawyers, MBAs, architects, marketing and public outreach professionals, software developers, system administrators, wireless communications experts and technicians. Finally, I would advise: don’t limit yourself, continue learning, find your own path and take it one step at a time. 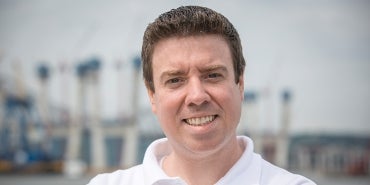 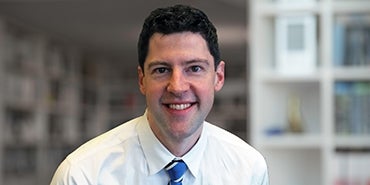 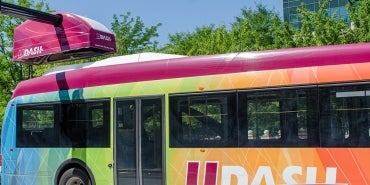