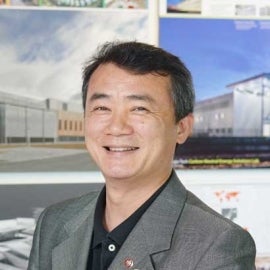 Over the past two decades, J.J. has dedicated his career to the practice of military architecture. His unique architectural insights and innovative work have contributed significantly to national and global security. The buildings he designs are considered among our nation’s most mission-critical assets.

In addition to his extensive design portfolio, J.J. has also advanced the practice of federal military architecture. He led a coalition of architects across the country to found the national Architectural Practice Committee of the Society of American Military Engineers, and served as its inaugural chair for its first four years. He also served on the national Board of Director for SAME, where one of his most visible achievements was the establishment of a Memorandum of Agreement between SAME and AIA in January 2015 that propelled the two organisations’ collaboration in continuing education, national conferences, awards and publications. For his outstanding leadership and contributions to the Society and AEC industry, SAME awarded him the 2015 President's Medal and elected him to the Academy of Fellows of SAME in 2016.

J.J. has served as a member of the AIA’s Committee on Design for more than 10 years. In 2011, he received the prestigious Urbahn Medal from SAME for his notable contributions in the field of architecture. He is an author of numerous technical articles and is a frequent speaker at national conferences. His work has received many honours, and it has been widely publicised.