The voter-approved $102 million Kansas City Streetcar opened May 6, 2016, and welcomed more than 32,000 passengers during its first weekend in service. Among the fastest federally-funded streetcar projects ever completed, KC Streetcar moved swiftly from initial planning to revenue service in about five years.

As the project's lead design firm, HDR partnered with local and regional agencies to identify the best transit mode and route for the unique needs of downtown Kansas City, Missouri. Through a series of competitive procurements, the city selected HDR to complete project development, environmental review and final design, resulting in the on-time and on-budget delivery of a modern streetcar system.

"Even though we have been involved with more than three dozen streetcar projects in North America, the energy that propelled Kansas City's project is truly unique," HDR Transit Director Tom Waldron said. "There was overwhelming support and strong leadership. It was a privilege to collaborate with such enthusiastic partners to create smart solutions."

With 16 stops spaced two to three blocks apart, the streetcar interfaces with a dozen bus routes. Our design team worked closely with adjacent stakeholders to precisely define the locations for each transit stop. Every stop was moved at least once during planning and/or design as a direct result of stakeholder feedback.

In the nearly five years after voters approved funding for the streetcar, the area surrounding its alignment has seen about $1.8 billion in economic development. About a quarter of that development was publicly credited (at least in part) to the creation of KC Streetcar.

To help the city establish project funding, we performed economic analyses supporting the city’s referendum to create a Transportation Development District, which allowed the city to generate about 60 percent of the project’s initial capital outlay and created sustainable funding for operations and maintenance.

Our project staff and economists also helped prepare the successful application for a federal Transportation Investment Generating Economic Recovery (TIGER) grant, which accounted for about 20 percent of the overall construction cost.

We worked with Kansas City and the Federal Transit Administration (FTA) to complete the project's environmental assessment (EA). The FTA issued a Finding of No Significant Impact (FONSI) soon after the EA comment period closed — just two days later — an outcome that usually takes months.

In September 2013, the FTA presented the project with the administration's prestigious Outstanding Achievement Award for Excellence in Environmental Document Preparation. This honour is granted to only two recipient-projects, every other year.

"After publishing the EA, we responded to each comment as it was received rather than waiting to respond to all of them at the end," HDR Environmental Lead Sharon Kelly said. "Simultaneously, we prepared a draft of the FONSI for review by the city and FTA. By the time the comment period closed, we had responded to the comments and had the draft FONSI ready for signatures."

We also developed a maintenance facility for the new streetcar system in a complicated site — two acres from the rail alignment and with a 30-foot slope. The design team studied the options, utilizing an interactive design charrette and made the sloping nature of the property an advantage with the maintenance areas at-grade, and administrative and operations moved to the second level. Overall, the concept was less costly, improved access and function with multi-use possibilities, and was designed to meet LEED Gold certification.

Beyond focusing on functional design and environmental impact, the project team identified opportunities to create an aesthetic signature for KC Streetcar. One such opportunity resulted in 13 streetcar platforms that feature the now iconic picture frame station design.

"Our architects led a series of workshops attended by staff from the city, KC Streetcar Authority and key stakeholders," Design Phase Project Manager Luke Olson said. "It's just one of many examples from this project that exemplify what's possible through strong partnerships, collaboration and community support." 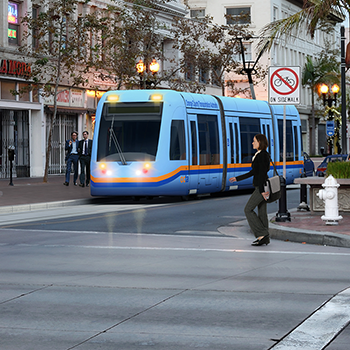 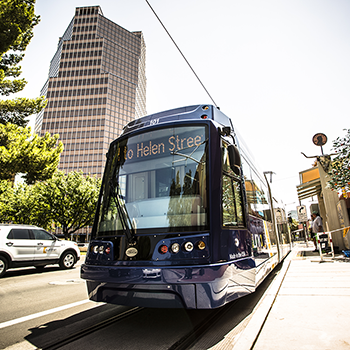