"Both PWKP and PennDOT have worked very hard on this innovative, complicated project that will speed the delivery of improved bridges across the state, especially in rural areas. Both Governor Wolf and I are committed to improving transportation to all areas of Pennsylvania and this program is fulfilling that pledge."
— PennDOT Secretary Leslie S. Richards. December 2017

HDR serves as the lead design firm for a public-private partnership (P3) project to rapidly replace 558 bridges throughout Pennsylvania. The project is aimed at quickly cutting into the state’s backlog of about 4,500 structurally deficient bridges.

Configuration of the P3, which includes a maintenance period of 25 years, reduced the average cost to design, build and maintain each bridge from more than $2 million to about $1.6 million. The Bond Buyer, a trade magazine, awarded the project’s P3 structuring the magazine’s annual Northeast “Deal of the Year” award, in 2015.

The total project cost for design and construction is about $899 million and is being executed through the concessionaire/construction joint venture of Plenary Walsh Keystone Partners (PWKP), for which we work as the lead design firm. The Pennsylvania Department of Transportation (PennDOT) retains ownership of all bridges.

Project design commenced in January 2015 and construction started that same summer. We immediately began to draw upon our substantial design resources at 30 of our 225 locations worldwide. We completed the majority of design and permitting for the entire project in 22 months.

As of November 2016, more than 500 HDR employees have contributed to the project, as well as approximately 300 sub-consultant staff. Our collective expertise reaches beyond bridge design into roadway design, hydraulics, geotechnical, traffic and utility engineering, information technology and transportation architecture. Our staff experts, many of them based in Pennsylvania, also brought experience in environmental science and the National Environmental Policy Act (NEPA), and worked with state and local agencies to obtain needed permits.

We accelerated design by delivering streamlined bridge plans that conveyed to the contractor only the information they needed to build high-quality bridges. This approach initially challenged project designers and PennDOT staff but it proved extremely successful. We coordinated bridge plans closely and planned in advance with the construction joint venture to make this efficiency possible — an efficiency necessitated by the demands of accelerated delivery — and a contributing factor to the 20 percent reduction in overall cost per bridge.

“We wanted to develop an aesthetic that would fit within the parameters needed for accelerated delivery but also make each bridge easily recognisable as a part of this program,” said Chris Smee, lead bridge architect.

Our design team collaborated with PennDOT, other stakeholders and the construction joint venture to reconcile schedule, constructability and artistry. Through this collaboration, we developed standard inset panels on the outside faces of barriers for each bridge. This unique and consistent bridge aesthetic provided PennDOT and other stakeholders with a context-sensitive solution that could be applied statewide.

Our collaboration with PennDOT and other stakeholders also led to the design of the program’s “signature” — a keystone emblem emblazoned on every bridge. Pennsylvania being the keystone state, the emblem connotes origin and location. Form liners for each keystone emblem also record the year in which that bridge was completed.

Seven of the 558 bridges are located in historic areas and merited heightened aesthetics. These were designated “enhanced bridges” and while each bears hallmarks of the rapid bridge program, each also has its own distinguishing architectural qualities.

The project celebrated completion of its 100th bridge in October 2016.

“Seeing these completed bridges and the time frame in which they were completed, and then comparing them to typical design-bid-build bridges, helps one realise what this project has accomplished,” said Plymouth Meeting, Pennsylvania-based Senior Bridge Engineer Manjeet Ahluwalia.

Engaging our team’s bridge design expertise is one way PennDOT leveraged the power of alternative delivery to achieve greater value. We brought innovations such as adjusting integral abutment standards to increase the number of places they could be used; we changed approach slab criteria based on standards used in other states; and developed standard slope protection details for small fills; and we incorporated some new materials. For example, we recommended widespread use of polyester polymer concrete overlay for bridge decks, not a common practice in Pennsylvania, which protects the deck and extends its life.

“Our progress to date is a testament to the dedication of the P3 team, PennDOT and the community, to enhance safety and quality of life. At the same time, it showcases what’s possible by embracing innovation to maximise the value of infrastructure investment,” said Ken Wright, Principal Program Manager. “This project demonstrates an approach that other owners should evaluate when facing considerable infrastructure deficiencies, limited funding and community expectations to address them sooner than later.”

Several elements our team developed for the Pennsylvania Rapid Bridge Replacement Program are beginning to find their way into statewide design standard updates. 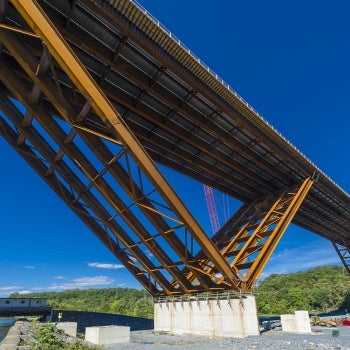