One of the largest metro areas in China, Chengdu is undertaking a major expansion of its transit system, with 10 separate lines simultaneously in construction, stretching nearly 2,500 kilometres through the city.

This pedestrian-oriented design can be seen in our proposed road realignment, which reconfigured existing “superblocks” into more unified, navigable sites. One key concept in encouraging this change was road couplets, which turn 6-lane streets into pairs of one-way 3-lane streets. Not only do the couplets offer pedestrians easier crossing, but we were also able to show through modelling that they can actually be more efficient for vehicles as well.

Our design for the station districts placed lower buildings in the center, with taller buildings surrounding. A reversal of many designs in the area, this arrangement preserves the overall density of the district while creating green space and a human-scaled retail center to encourage pedestrian flow and community gathering places at the core. Sunken courtyards in both stations also unify at-grade and below-grade levels, with the lower level viewable from above. 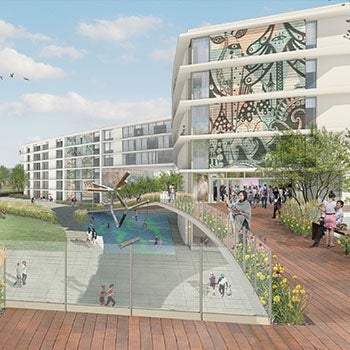