Experts Talk: 3D Design and Deliverables with Will Sharp and Connor Christian

As organizations and agencies confront this change, we are proactively leading several projects to advance the technology and adoption of 3D deliverables, including the AASHTO BIM for Bridges and Structures five-year pooled fund study. This collaborative effort of 19 state Departments of Transportation, the Federal Highway Administration and the American Association of State Highway and Transportation Officials' Committee on Bridges and Structures is developing an open, national standard for the exchange of information necessary for the design, fabrication and construction of bridges and structures in the United States.

Will Sharp, our highways director, and Connor Christian, transportation building information modelling program manager, are on the front line of this advancing new technology. Sharp has been doing 3D modelling for airports, dams and highway projects since the late ‘80s. More recently, he’s concentrated on national efforts on BIM for Infrastructure, including work with AASHTO and the Transportation Research Board BIM for Infrastructure Subcommittee.

Christian built his first model in 2003 and has worked with a wide variety of software types from a wide variety of vendors. He has done extensive work both helping owners implement 3D technology within their organizations and helping BIM progress across the industry through the development of national standards and specifications.

Sharp: One of my first projects at HDR, over 30 years ago, was modelling runways and building pads for several alternatives being considered for the new Denver International Airport Master Plan. Our approach has greatly changed over time. I would say that we put more effort into it now, but we're also getting a lot more out of the 3D tools that we're using. Thirty years ago, we used it mostly to automate the design plans, and we had limited benefits from the data. Now, we’re able to provide construction level accuracy deliverables that contractors can build from, including the data needed for Automated Machine Guidance grading and paving.

Christian: There's been 3D tech around for 30, 40 years, but I feel like it gained momentum around 2007. It has certainly changed since then. It used to be, “How do I make a model?” Now, it’s “How do I attribute a model” and “How can I use those attributes to do something more powerful?” That’s a much different workflow. It’s really an important continuation of the evolution from people creating models to watching computers make models for us based on a set of criteria.

Fundamental changes in the technology are really just occurring now. Software tools that are common within the public workspace are updating their parametric capabilities and people are starting to realize the same advantages that maybe other market sectors have seen before. As major agencies continue their adoption of more and more robust 3D design, stakeholders in those projects such as municipalities and smaller agencies are also getting an opportunity to see the benefits firsthand.

Sharp: From the national standpoint, I definitely see this trending with the DOTs and major transportation agencies. These public agencies are moving well beyond conventional design deliverables towards a contractual signed and sealed 3D model, which will eventually replace the traditional 2D plan sheets. Five major transportation agencies, including four state DOTs and the Illinois Tollway have ongoing pilot projects with signed and sealed 3D contractual deliverables for construction. HDR has been fortunate to be the engineer of record or construction inspector for many of these early pilot projects, including a variety of bridge and roadway designs. 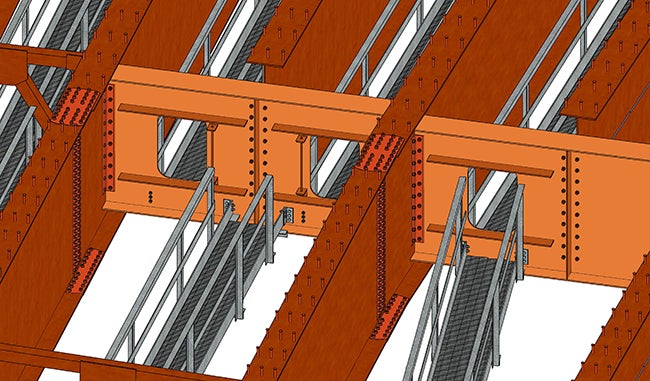 Christian: Lots and lots of tasks become easier. When people ask about 3D design, professionals start to break it down immediately, to say, what is your BIM use? That is, what do you intend to use your model to help you do? Because there are so many different things that a model can do. The real goal is to understand how to build your model to help you. When you understand from the beginning that you want to use the model for quantity takeoff, or you want to use it to visualize your schedule, or you want to use it for asset management, then you tailor it with those goals in mind.

When not managed well, that can lead to cross-disciplinary misunderstandings or conflicts. But 3D models and technology are getting far enough along that each discipline can now develop its own 3D model and we can pull them together into a federated model to see all the different disciplines together in a single model. And from that federated model we can do automated interdisciplinary coordination checks and clash detection. It just gives us a much better understanding of the constructability of the design, resolving issues before the project is let.

Sharp: The primary drivers in the transportation industry are reduced overall project costs due to improved constructability and reduced change orders in the field. Requiring a 3D deliverable means the benefits discussed earlier are built into the process, and we also have seen improved construction efficiency, with contractors being able to more fully leverage the digital data developed during the design process.

Christian: In a word: Efficiency. Right now we build 3D models. Then we stop building the 3D model and make 2D documents to represent the 3D model. But there’s another option.

We can further develop the model so it can be utilized as the controlling document. This requires more initial effort to make the model more comprehensive, but it saves time by eliminating the need for producing 2D plans. This higher efficiency is the primary benefit of signed and sealed 3D deliverables. 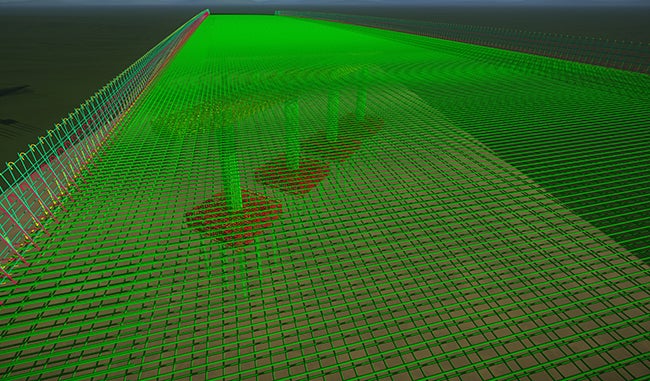 Sharp: 3D signed and sealed deliverables are becoming more commonplace in the industry. I would say within the next five years it will be typical to have 3D contractual deliverables throughout the industry. Three major transportation agencies already have projects that have been constructed with signed and sealed 3D deliverables, and there are many lessons learned from these early projects. AASHTO has also been very active in exploring this work through the Joint Technical Committee on Electronic Engineering Standards.

The industry continues to take critical steps toward widespread adoption. For example, in October 2019 at the AASHTO Fall Meeting in St. Louis, the state DOTs executive leadership formally adopted a new national standardized open data schema for sharing 3D data. This important action is a critical milestone in allowing BIM data to be shared seamlessly throughout the project lifecycle, from design to fabrication, construction and asset management, regardless of the software used.

Christian: In the next five years, you’re going to start to see things moving past the pilot phase. What’s happening now is pushing people’s tools and practices to be able to deal with these technology changes as they come. It’s not a question of whether 3D deliverables are coming. They’re already in use. The question is, “When are clients and owners going to start getting value from them?”

Sharp: BIM for Infrastructure is taking hold in the U.S., and it will be a major paradigm shift for the transportation industry. Many transportation agencies are actively moving toward digital 3D deliverables, including Pennsylvania DOT’s 3D Digital Delivery initiative. The industry just needs to be aware, the time is now to get proactively involved with this technology change.

Most agencies that have completed projects with 3D contractual deliverables have started with smaller pilot projects, ideally working with consultants and contractors with proven experience in 3D deliverables and automated machine guidance construction. There are many valuable lessons that have been learned on these early pilots, including the need to clearly identify the BIM level of development for the 3D deliverables, level of accuracy, intended uses, and limitations of the data. Several agencies have also established a partnering committee with consultants, contractors, and other stakeholders as they’ve moved toward 3D signed and sealed deliverables to get input on overall approach, process, and deliverables.

Christian: I think it's important for clients and owners to know that they can ask for a 3D model. Start there because it’s the first step in this entire process. None of it works unless people are creating 3D models and understanding the tremendous benefits they can bring.

That said, there's a there's a bit of a learning curve right at the beginning. You can ask for a 3D model and get something that's not valuable. It requires careful planning to determine how you're going to get from point A to point B with your technology. The technology and change is coming fast, which is precisely why you shouldn't rush into it. As soon as you poke your head into this world, there are a million different directions to go, and understanding which of those are actually valuable is really, really hard. That’s the importance of working with trusted partners and consultants who have the background to navigate the technology and determine how to get the best value out of it.

Download a PDF of Will Sharp and Connor Christian's Experts Talk