Crossing the Great Salt Lake shaved 43 miles off the transcontinental railroad at the turn of the 20th century, reducing ever after the railroad’s overhead and maintenance costs. Tracks today top a 12-mile causeway built in the late 1950s to replace the original wooden trestle, and Class-1 trains cross the man-made embankment carrying critical freight to and from the West Coast. There, two of the country’s busiest container terminals fuel a sprawling economic engine linked inextricably to the century-old shortcut in Utah.

Consequently, the rail network’s infrastructure is also linked to the delicate ecology of the Great Salt Lake. Bisecting the lake, the rock-fill causeway can impact water flows and mineral saturation on either side of it. Brine shrimp, brine flies, several species of algae and millions of shorebirds depend on the lake for habitat, which could be threatened by a salinity imbalance. Ecological harmony also allows $1.3 billion annually to enter the state’s economy from mineral extraction, which produces raw materials such as magnesium and road salt, and from the harvesting of brine shrimp.

The causeway’s original design allowed water to flow through it using two 15-foot culverts that also allowed passage for small boats. Over time, however, the causeway settled into the lake’s soft, silt bottom. The culverts grew more and more obstructed. Eventually, the settling caused the culverts to crack. In 2012 and 2013, the U.S. Army Corps of Engineers approved filling and closing first one and then the other to maintain the causeway’s structural integrity and to continue allowing trains to safely move goods across the lake. But something needed to replace the culverts’ ability to facilitate fluid transfer between the north and south arms of the lake.

We led final design and environmental permitting for a sustainable solution that drew on our ENR No. 1 bridge practice as well as our environmental science expertise. We led planning for a new breach in the causeway about five miles from the western shore. The breach facilitates natural flows, supporting water and salt exchange from one side to the other to replace the function of the original culverts. Trains span the breach using a new, 180-foot rail bridge supported by 49 piles. The corrosive saltwater environment called for special details and material, and each pile is sunken 200 feet into the volatile lake bed even though the lake’s depths measure around 35 feet.

Alongside the bridge, a first-of-its-kind earthen-control berm serves as an adaptive management tool that satisfies requirements for the five Clean Water Act 404 and 401 permits we obtained. Adding and removing riprap to the berm can decrease or increase water and salt transfer from one side of the causeway to the other. This tool will help Utah manage the lake for years to come.

The complexity of this project mobilized highly specialized expertise from our offices throughout the U.S. Our environmental documentation has led to a new understanding of the lake’s ecological importance, and we will continue to monitor and report on environmental impacts of the causeway improvements through the end of 2021. 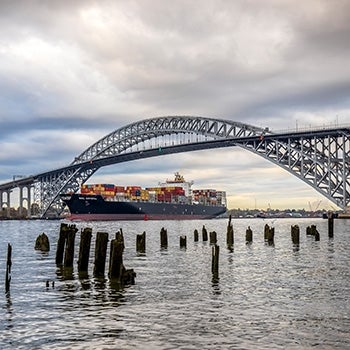