Located in the building that was home to the Pen Mar Movie Theatre, TIME Winery is the first urban winery in downtown Penticton, B.C. The structure was renovated and retrofitted in order to house the winery which integrates a state-of-the-art production facility, tasting area, and restaurant. Also incorporated is a small theatre that pays homage to the former theatre complex.

The project was constructed in two phases. Phase 1 focused on the production facility that involved a simple renovation to expose much of the existing theatre structure. Glue laminated beams and columns as well as two by four decking were stripped and cleaned, and expressed as part of the overall architectural aesthetic.

Phase 2 focused on the public tasting and eating space. This area is expressed as a two-storey wood structure that features a giant truss constructed from glue laminated beams and spans north to south across the entire interior space. 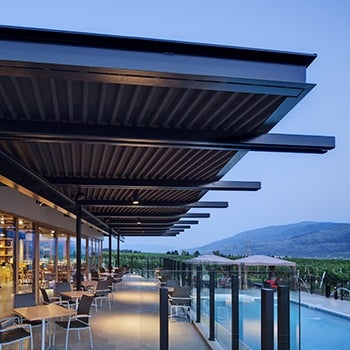