Mass Timber Constructed Hotel a first in the Okanagan

The new West Wing at Lakeside Resort in Penticton overlooks the south shore of Okanagan Lake. The project is a modern, iconic addition to Penticton’s waterfront.

The six-story, 70-suite hotel building is constructed of mass timber. It is believed to feature the most extensive use of cross-laminated timber panels in any building in the Okanagan, a unique feature considering CLT is not a typical material for this building typology.

HDR worked closely with a team of engineers throughout the design to ensure that the building exceeded all standards of the building code, with careful attention paid to acoustic properties and fire separations.

A wood structure such as this offers many advantages, particularly regarding environmental efficiency. Wood acts as a “carbon sink,” since trees absorb carbon dioxide from the atmosphere, whereas a concrete structure requires substantial energy to fabricate, resulting in the release of carbon dioxide.

The CLT panels used in the addition are large — up to 9 feet wide and 41 feet long — and span great distances. They were produced locally in the Okanagan region and are used in all major shear elements of the building: in the floor and roof, and in the vertical walls that separate decks on the exterior. The building also features exposed wood ceilings, large glulam columns and beams, wood stairs and stair shafts, and more throughout the building’s interior design.

Light wood frame components were also prefabricated. The ease of this process translates to major time and costs savings — knocking an estimated six weeks off the construction schedule.

Cost savings also came as a result of the warm finish wood provides in its natural state. One of the core design initiatives of the project was to expose the wood wherever possible — no additional finishes were required. CLT and glulam is exposed in and out of the suites, corridor ceilings are exposed CLT with no interruptions, and the atrium wall and ceiling structure is exposed mass timber. 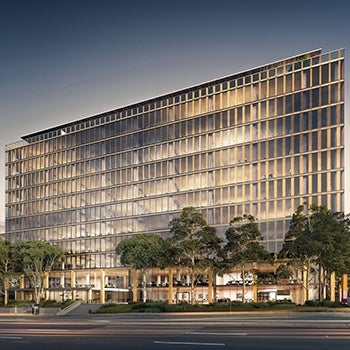