Stretcher Orientation in the Emergency Department

Unlike in the inpatient environment where the patient’s bed is nearly always parallel to the corridor, the stretcher orientation in Emergency Department Treatment Rooms is driven by multiple factors with many trade-offs and considerations related to access, visualization and flexibility.

When the stretcher is positioned perpendicular to the corridor, the foot of the stretcher points directly towards the entry door to the treatment room.  Typically, the room is zoned so that staff and hand hygiene functions occur on the patient’s right (left side of the room) and the family zone is to the patient’s left.  This orientation tends to work best in square-shaped rooms or rooms that are wider than they are deep.

From the corridor, the staff’s view to the patient is direct, straight down the length of the bed. Correspondingly, the patient’s view is toward the door. Depending on the size and type of door and unit arrangement, the patient may have visualization to the care team station, clinical support rooms, etc.  When a patient is impatient or unhappy, this view may add to the level of anxiety if he or she feels they are waiting and don’t understand why. The television, when utilized, is typically positioned in the corner of the room near the sink so that the family and patient can both see it. As a result, family members sitting to the side may also be directing their view towards the corridor and door. The television’s location does not necessarily help in distracting the patient who may see movement in the corridor, even while watching the television (depending on curtain use, etc.) Positive distractions can aid in calmer patients and patient satisfaction scores, but this stretcher orientation may not fully take advantage of the television as a distraction.

While not every ED treatment room has the opportunity to be located on an exterior wall or the potential to integrate natural light, this orientation is not conducive to adding quality windows. Because of the medical gases on the headwall, a window may be limited to a higher transom or to the family side and would be competing for space with all the equipment typically mounted on the headwall. More importantly, the patient would not have the ability to see any views out the window to help as a positive distract or alleviate to stress.

Also, with this orientation there is a direct view from the corridor to the foot of the stretcher. For GYN examinations, this is not recommended, as it compromises the patient’s privacy and would rely wholly on a cubicle curtain to protect that privacy. A non-standard room or stretcher rotation would be necessary to facilitate rooms regularly used for GYN examinations.

Movement of the stretcher and emergency equipment into and out of the room is most direct in this orientation. Access is a straight push into the room. Patients may be transported multiple times in and out during an ED visit for diagnostic tests, so ease of access is paramount. Staff members also have immediate access to three sides of the stretcher from the door with this arrangement, which is particularly helpful when emergency codes are called. Access to the patient’s head may require an additional step in this orientation, however.

Similarly, family members also have ease of access to the entry door. Potentially dissatisfied or combative family members have no barrier in gaining quick access to nurses and providers as they enter or leave the room. As staff safety becomes a larger issue in the ED, stretcher positioning may play a small role, depending on the orientation.

When square footage is at a premium, this arrangement likely allows for the smallest room size. Per FGI Guidelines, an ED treatment room must be a minimum of 120 clear SF. Given the rising acuity in the ED, rooms designed to the smallest allowable square footage by code may struggle to meet the functional need. With equipment added and the required clearance around the stretcher of 3’ this typically grows to 130-145 SF

Because of the location of the headwall along the rear wall, structural coordination with the layout becomes very important. If a column falls in the middle of the headwall, monitor and equipment placement and access become more difficult and more space at the foot of the stretcher may be needed to maintain 3’ clear if the stretcher can’t push up against the rear wall. This orientation, therefore, is less flexible in working with a structural grid occurring along the rear wall, which is common.

When aligned parallel to the corridor, the foot of the stretcher points away from the entry door towards the side wall of the treatment room, like an inpatient room. In general, the room is zoned so that staff and hand hygiene functions occur on the patient’s right, immediately upon entry, closest to the door. The family zone is to the patient’s left against the rear wall. This orientation tends to work best in rooms that are proportioned more rectilinear, deeper than wide.

From the corridor, the staff’s view to the patient is oblique, with the patient’s head in profile. The patient’s view is toward the side wall where the television, if utilized, is most likely positioned. In order to watch the door, the patient must turn her head. The family certainly has a more direct view of the door in this arrangement, but the positioning of the television encourages all eyes away from the door to better provide distraction and make staff passing by the room less obvious.

Like an inpatient room, the location of the stretcher parallel to the corridor also allows for a patient to have views out of a window, when one is able to be incorporated into an exterior wall. Without conflict with the headwall and medical gases, a potential window could also be lower and larger in this arrangement, allowing for both views and visualization of natural light.

This room arrangement is best for GYN examinations, as the foot of the bed is pointed away from the entry door and can be standardized for every room.

In this arrangement, however, the stretcher acts as a barrier for disgruntled family members, as well. If a combative family member were to charge the door, the staff member may have a little more time to react because the family would have to go around the stretcher.

This arrangement works well for treatment spaces that are roughly 144 to 165 square feet. Smaller rooms would propose a challenge to meeting minimum clearances at sink and around the stretcher in this orientation. Depending on the total number of treatment rooms, this increase in room size can certainly add up.

Because the location of the headwall is potentially separate from the exterior wall, column variability becomes much less of an issue with this layout. A column could essentially fall anywhere along the rear wall and the furniture and equipment could adjust to accommodate it, providing the most structural flexibility.

The ultimate decision to select a style of stretcher orientation depends on the prioritization of the factors discussed — views and visualization, access, and size and flexibility, as well as project budget, available space, and established hospital standards. Historically, the arrangement perpendicular to the corridor is more prevalent. Perpendicular orientation may facilitate the best access, but creates some issues with longer length of stay patients, admissions holding and observation patients with long waits. When considered from the perspective of patient satisfaction, staff safety and structural flexibility, there are many compelling reasons to at least consider an orientation parallel to the corridor. 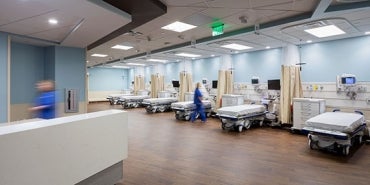