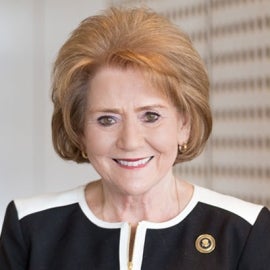 Mary is the former Secretary for the United States Department of Transportation, serving from 2006 to 2009. She also served as administrator of the Federal Highway Administration from 2001 through 2005, leading efforts to improve safety and security, reduce congestion, streamline environmental review processes and enhance mobility on America's roads and bridges.

Prior to her appointment to FHWA, Mary was the director of the Arizona Department of Transportation. She joined ADOT in 1985, working her way up through the ranks to serve as contract administrator, deputy director for administration and deputy director. Governor Jane Hull appointed her director in 1998. While in office, she was recognized as the Most Influential Person in Arizona Transportation by the Arizona Business Journal.

From 2005 to 2006, Mary was a senior vice president and national director for transportation policy and consulting for HDR. She has served on HDR’s Board of Directors since 2009.