Construction at major airports is always complex, but even more so at Los Angeles International Airport, the second busiest airport in the U.S. and the third busiest in the world.

With a growing influx of passengers from across the globe, the governing body of LAX — Los Angeles World Airports — issued a request for proposals for the design and construction of a new Automated People Mover train system in 2017.

Expected to carry up to 87 million passengers per year, the APM features a 2.25-mile elevated guideway that passes through five stations and links the Consolidated Rental Car Facility with the LAX Central Terminal Area. When operational in 2023, it will also connect travelers to regional bus and light rail systems.

At a value of $2 billion, it is one of the largest active airport construction projects in the U.S.

We are heading a team of 37 partner design firms across five different time zones and with various specializations to work on LAWA's APM initiative.

LAWA's rigorous technical standards and design criteria requires seamless coordination between all design teams. "HDR was required to produce a Level of Design 300 model for all segments of the APM project," says Cameron Schaefer, HDR's digital design lead on the project. 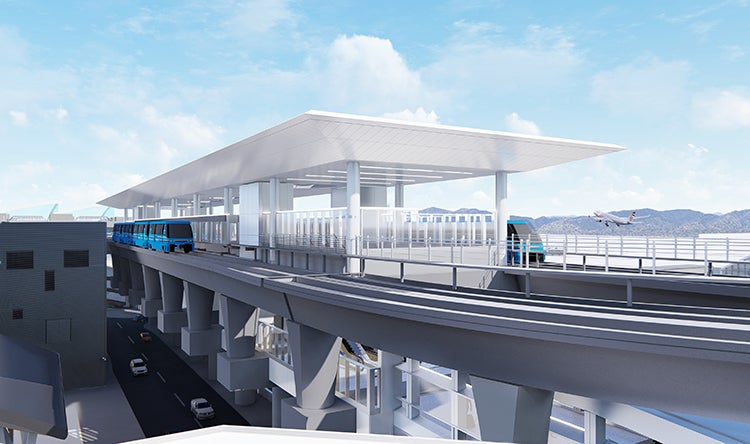 As one of the largest building information modeling projects in the nation, the APM involves more than 180 design models created and maintained by 300+ BIM designers.

The design incorporates the train guideway, stations, elevators and escalators, elevated passenger walkway structures (with moving walkways between stations and airport terminals), parking structures, roadway and landscape improvements, and a maintenance and storage facility for the system's electric trains.

In need of a flexible solution, we chose Autodesk BIM 360 and additional BIM modules for model coordination and data management. “We needed to manage a large team and keep everyone on the same page and up to date with coordination and information sharing," Schaefer says. "Integrating horizontal and vertical models into one common federated model allowed us to share information between platforms and coordinate the work of civil and architectural teams on the guideway and station models."

According to Jay Chiglo, HDR's alternative delivery director and the principal in charge of LAWA’s APM, this project "has seen the most extensive use of BIM that I know of in HDR on the engineering side." 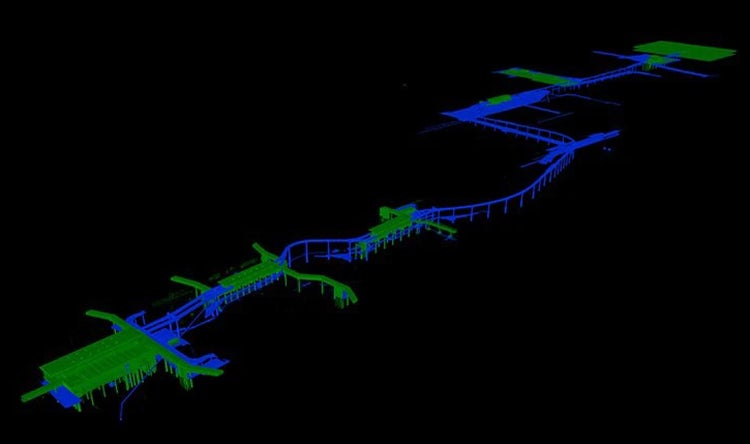 The multidisciplinary approach has helped improve communication between teams and stakeholders, exposed constructability issues during design in the office rather than in the field, and enhanced coordination across multiple design platforms (Civil 3D, InfraWorks, Revit, Inventor).

Keeping the Project on ‘Track’ with BIM 360

BIM 360 is instrumental in tracking progress and updating all files across the project. "BIM 360 gave us the initial platform for doing a live design within all of the stations that were on this project," says Pedram Oskouie, HDR's deputy BIM manager. "It allowed us to communicate more efficiently, and we used the document management module for handling coordination and design issues, which allowed us to be able to assign them to the designers, track them and then create reports from them.”

“The models were shared with our construction partners on a weekly basis and used to communicate and convey design intent," says Schaefer.

"You can't build the facilities without understanding how the guideway ties in with the roads, walkways and utilities,” says Chiglo. “BIM played a huge role in tying all of our work together, which was extremely important to keep us moving on such a fast­ paced, schedule-driven project." 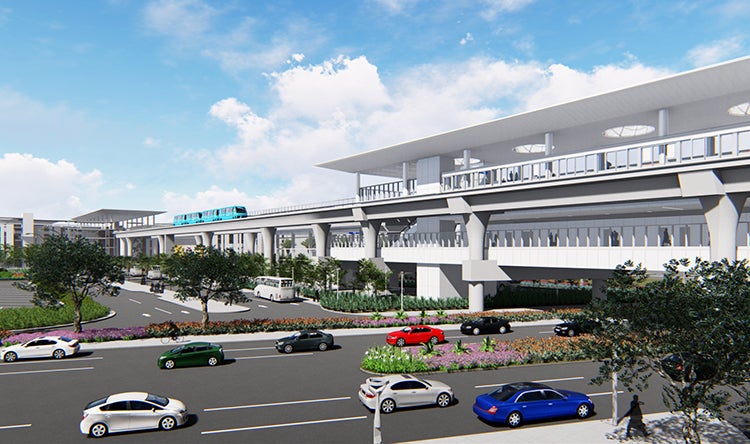 'Bridging the Gap' with a Linear Bridge Design Workflow

Bringing the team together in a common data environment with one shared model was an important step for collaboration. But the team also needed an efficient process for incorporating designs that were created in multiple platforms into one common federated model.

Autodesk's InfraWorks, Inventor, Civil 3D and Revit powered a new guideway bridge structures design workflow to meet this challenge. HDR and Autodesk collaborated throughout the design process to improve the workflow as needed.

"Autodesk implemented a new capability that provides increased precision and consistency between Civil 3D alignments and their corresponding use in InfraWorks models. Since this was required on the project, we retroactively migrated their very detailed model at the data level in order to leverage this enhancement. Otherwise, they would have had to remodel all their guideway bridge structures," explains Ara Ashikian, senior product manager for the Autodesk Civil Structures team.

"It was this kind of iteration back and forth that gave confidence to both sides. We knew we were already handling most of the aspects and the final parts were going to come up from the design team as they actually push it on the real project. It's a balancing act." 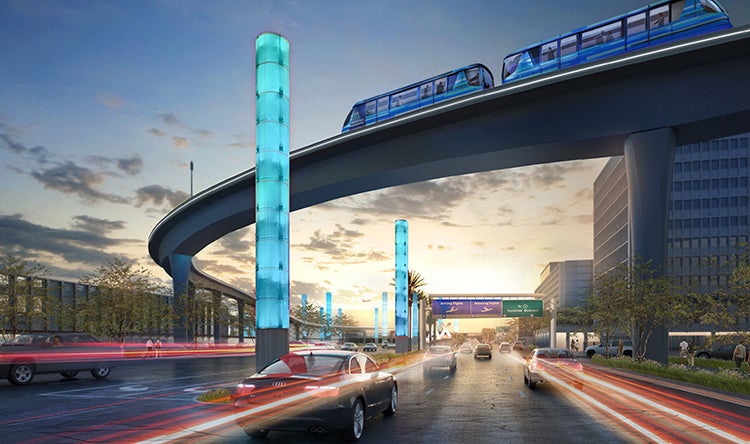 The workflow closes the gap between Civil 3D and Revit.

"It's all done through InfraWorks as the main platform bridging that gap," Schaefer says. "What is so powerful about the bridge modeling workflow is how we are able to take design in its life-cycle stage. For example, our rail alignment that is all designed in Civil 3D was brought into InfraWorks to start to build a bridge dynamically tied to the rail alignment. We are ultimately exporting that model to Revit, which can then be used by the stations' architects."

This saves time when compared to using a static model in Revit, which requires a new iteration each time an alignment changes or when updating something from Civil 3D.

“We were able to understand how our design interacts with the real world. We can pull in the point cloud, put it in the 3D model and have highly accurate information at our fingertips." 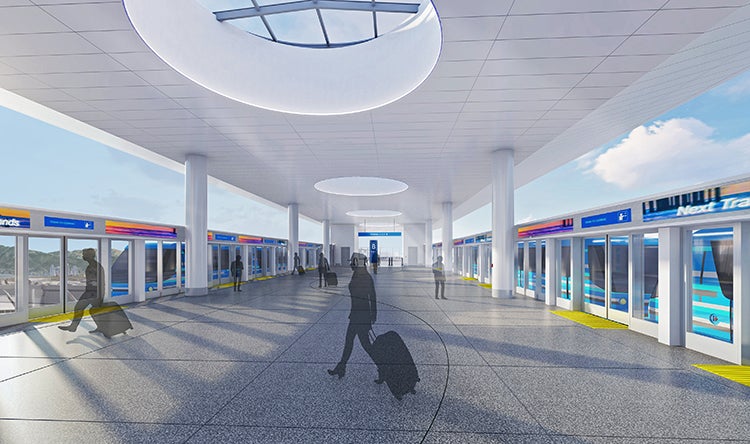 The new bridge design workflow enhances coordination and collaboration between the guideway structural and architectural teams, and it allows them to better deal with the curve balls that emerge in such a complex undertaking.

"There were changes and some added structures both teams were able to model very quickly," recalls Chung. "In that Revit space, through this linear bridge workflow, we were able to have a turnaround within a day to ensure those structures lined up, that the elevations were correct and coordinate systems were matched between horizontal and vertical disciplines."

With the amount of coordination needed between discipline teams and the need for dynamic and accurate updates for the APM guideway/bridge design, the system developed with Autodesk was intentionally flexible.

"Communication is key and automation is critical," Schaefer says.

"With this many team members, the more steps in the process that allow you to automate and eliminate manual tasks, the better. We were able to find effective ways to convey complex ideas and workflows to multiple stakeholders all across the country. BIM 360, model coordination and Navisworks played a huge role in being able to tackle this project effectively."

"Precision is paramount," agrees Ashikian. "You want confidence that the Civil 3D alignment and the Revit buildings and all the bridges are fully aligned.

“Eventually everything goes into Revit and Navisworks and lines up precisely; thanks to a workflow that goes from early design to detailed design, and all the requirements along the way for precision, level of detail and parametrics." 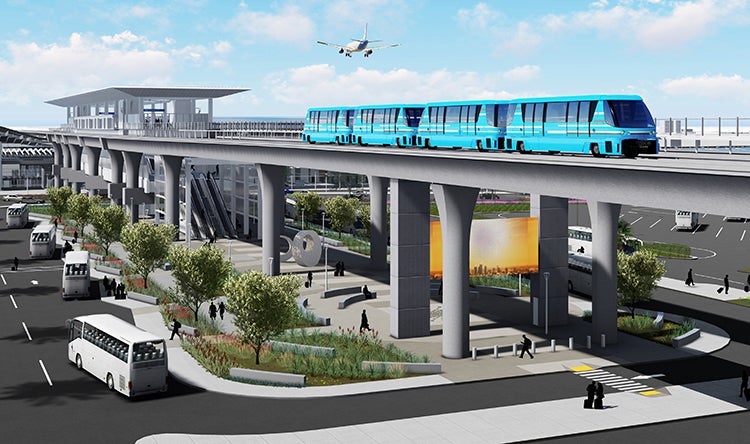 Working on a live project with HDR allowed Autodesk to focus on the best ways to extend the product, explains Ashikian.

"For example, we added all the generic objects and asked, 'How do we make these a lot smarter so that they place themselves more intuitively? How can we add this to the product to add more value for everyone?' For this project and HDR, as well as future projects," Ashikian says.

According to Schaefer, pushing the envelope on this project has given HDR the opportunity to innovate.

"Experiencing how effective this Autodesk workflow can be on the APM project, we wasted no time," says Schaefer on implementing this new workflow on new projects.

We have also been using it (since January 2020) on the Ontario Line Project in Toronto, Ontario, a new 16-km subway line, with the firm acting as the Technical Advisor for Infrastructure Ontario and Metrolinx. 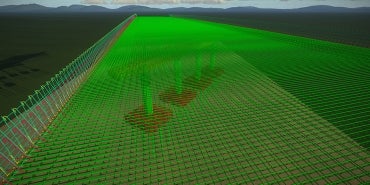 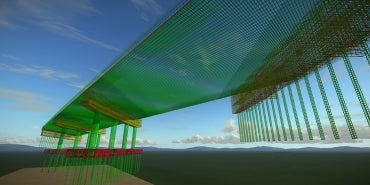 Switching to 3D BIM Deliverables: 6 Factors Transportation Agencies Should Consider
In the Media 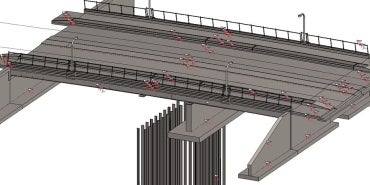 The Benefits of BIM for Infrastructure Design Gain New Attention