Adaptations is an ongoing series of interviews with educators and administrators from around the world, representing diverse backgrounds, disciplines and institutions. These interviews examine how educational institutions are adapting to the ever-changing education landscape and how the built environment helps or hinders them in that effort.

A few weeks back, we posted Part 1 of our inaugural installment of Adaptations, highlighting our interview with Professor John Kyndt, where he provided insight into the major changes taking place in higher education, specifically looking at the shift towards inquiry-based learning approaches. In Part 2 of the installment, Professor Kyndt speaks with HDR’s Mike Hamilton about his experience with implementing a hybrid course — which incorporates elements of both the physical and virtual classroom in the same course.

Inside & Out: How the Use of Space is Changing

Mike Hamilton: In your tenure, have you seen any changes to ways that students utilize the spaces inside or outside of the classroom on campus?

John Kyndt: When they come into the classroom they want to have connectivity — that is, they want access to their devices. They bring in their laptops and their phones — something they didn't used to do. I allow the laptops and the cell phones during my class as long as they silence them. And I've had it happen where we are talking about a certain topic and I ask the students a question, and they look up the answer on their laptop. It’s kind of a new trend that you see. When I was going to my science courses we had a pen and paper. We wouldn't dare bring a computer in.

But outside the space itself — we are seeing the proliferation of online courses — an option that many students want to have. However, a newer trend I’m seeing is that many students don’t want an experience that is 100% online. They want to be able to be connected with a real, physical space as well. They want crossover between the two and that flexibility to either be online when they need to or to be in a physical space if they need to as well. Can we completely accommodate that? That's another question; but that's the direction that we're going.

The Nuts & Bolts of the Hybrid Courses

Mike Hamilton: So you have started to explore the concept of “hybrid courses.” Can you explain how exactly they work?

John Kyndt: For instance, in this lab, I teach a nutrition class on Tuesday evenings. I have an online class and a residential class that I merge together. I invite the students from the online class to come and join virtually into the classroom. Students join a virtual room. Then, if I turn the webcam on, they can see the whole room. And I can see their webcam pop up. I see about five people at the same time at the most, but there can be 100 people in the room. Whoever speaks comes up on my screen. It's kind of like a Google Hangout.

And then I can share my slides that I am showing to the residential class with the virtual class as well, so everyone is looking at the same thing. The virtual students can switch between screens so they can see the classroom or the slides. I can draw something on a virtual whiteboard that they can see as well. I haven't used the whiteboard all that much, but I do show my slides and I bring virtual students in to talk.

I use the side screens in the classrooms in addition to the front screen. I bring those down in the room and show my presentations there and if somebody in the virtual classroom talks then I put that person up on those screens as well.

John Kyndt: This is the first time I'm trying this kind of hybrid setup. I find the students kind of timid. Typically, they're willing to type a question in the chat box, and then I read the question to the rest of the class. I've only had a few that actually try to say something in front of the group. It's kind of intimidating to do that virtually I think. But we'll see.

Mike Hamilton: Do they have any other sort of interaction in the physical space beyond the virtual? Can they come to class?

John Kyndt: This particular group of students does not. In that sense, we don't really have TRUE hybrid classes where students can enroll and have the flexibility to switch between online and residential class sessions over the course of a semester. Instead, they typically enroll in solely the residential course or the online course. So it's up to the professor to merge the two and decide what they will allow. For example, what I’ve done for the residential students that sign up — they sometimes have a sick child or they're sick themselves — I've opened up the virtual link for them. So I had a few “residential” students that don't always come to my residential class, but they watch it online from at home. I think that’s totally fine — the whole point of the hybrid class is to have the flexibility.

Of course, I do want to keep students in my classroom, so they can’t all stay home. So far that hasn't been a problem.

This winter I will be offering a true hybrid version of this class, where students don’t have to choose to enroll in residential or online but have the flexibility to come to the physical space or tune in virtually as they please.

A Classroom with Virtual Impact

Mike Hamilton: What would it have been like to do that type of hybrid course in the space you were in before versus a space like this?

John Kyndt: Even if we would have had the capability to record the whole room in our previous space (which we didn’t), I don’t think it would have had the same effect on the students. Because just seeing a boring classroom versus seeing something like this interesting, cool space creates a different experience for the virtual student. If you look at the student's perspective through the webcam, it feels like you're in an open space, in a classroom that you want to be in and join in the conversation.

It’s hopefully the same kind of effect that things like the open windows have on residential students — which hopefully make them want to come into the classroom. Even as a professor, this may sound silly, but you kind of feel more connected to the world in such an open space versus being in your classroom enclosed by four walls with no windows.

Mike Hamilton: Have you used VR (virtual reality) or AR (augmented reality) in your classroom or have you seen it used in science education at all?

John Kyndt: That's an interesting question because it is up and coming as well. I'm curious to see what we can do with it. I think especially in the sciences there's a lot you could do, for example showing models of organisms or chemical molecules as augmented reality in the room and allowing students to see those with an app on their devices. I know Bellevue University has an interest. We'll have to see, the faculty has to see how we can integrate it as well …

It's crazy to think about what the next evolution of it all could be. I mean — I would love to have holograms of students in my classroom, too.  Maybe that's the next step?!

Mike Hamilton: The true hybrid — you have the residential students, the virtual students and then the hologram students.

John Kyndt: Right? That would be great. I think it would work fine. 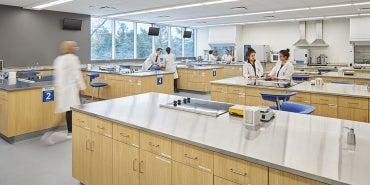