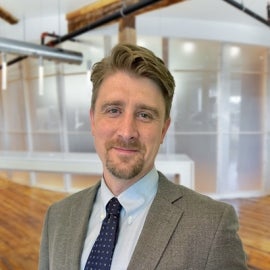 Chad has over a decade of experience in the water and wastewater treatment field with a background in regulatory, public and private sectors.

He began his career at the Pennsylvania Department of Environmental Protection reviewing and issuing permits for water treatment facilities. Later, he became the superintendent of treatment and quality control for a water utility serving over 1 million people in the greater Philadelphia area where he was responsible for day-to-day operations of 55 remote groundwater pumping stations, as well as distribution system water quality in over 50 potable water storage tanks and approximately 5,000 miles of water distribution system piping.

As a municipal engineer, Chad has designed over 20 water treatment systems to remove PFAS compounds from contaminated public drinking water supply wells in southeastern Pennsylvania. During this time, Chad was actively involved in pilot testing, permitting, constructing and operating these treatment systems.

As a permitting lead, Chad has experience obtaining permits through the Water Quality Part 2, Act 537, National Pollutant Discharge Elimination System and the Safe Drinking Water programs, among others.

Today, Chad remains actively involved in several large-scale drinking water and wastewater projects. He is a registered professional engineer, a project management professional and holds a Class A water system operators license through the Commonwealth of Pennsylvania.