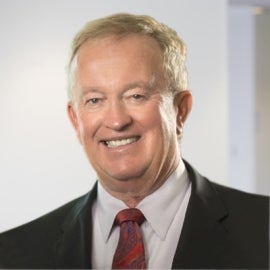 As the former chairman and chief executive officer of HDR, Richard (Dick) Bell carries extensive knowledge of the issues affecting our company. He has a unique understanding of our industry and brings pragmatic business judgment to the board of directors, where he has served as an outside director since his retirement in 2011.

In his 36 years with our company, Dick held numerous leadership positions highlighted by his role as CEO from 1996 to 2011. In 1996, he led an employee buyback of the company from Bouygues SA, returning the firm to employee ownership. Dick served as the president of HDR Techserv starting in 1985 and became CEO of HDR Engineering in 1989. As part of his duties on the board of directors, he is the chair of the Compensation Committee.

Dick is a graduate of South Dakota State University with bachelor’s and master’s degrees in civil engineering. He began his career leading solid waste management, energy and resource recovery projects, joining HDR in 1974.

Dick has led numerous civic activities in Omaha, Nebraska, and has served as a member of several influential boards, including Heritage Services, Blue Cross Blue Shield of Nebraska, The Durham Museum, the Omaha Performing Arts Society, and the University of Nebraska's Peter Kiewit Institute and Durham School of Architectural Engineering & Construction.