Bayonne Bridge: A Project Without Precedent

Bayonne Bridge is an iconic arch bridge, designed by Othmar Ammann, whose name is synonymous with innovative bridge designs. Since its opening in 1931, it has captivated engineers and architects. And for the first 46 years of its life, it held the record as the longest through arch bridge in the world.

But for all its merits,  Bayonne Bridge eventually began to restrict access to the ports of Newark and Elizabeth — two of the busiest in North America. Its deck allowed only 151 feet of clearance at mid-span, not enough for post-Panamax freighters to pass under it. These ships would have had to find other ports of call if the Port Authority of New York & New Jersey hadn’t embarked on an engineering journey never before attempted — raising the deck 64 feet while maintaining bridge service throughout construction.

HDR helped make that possible, as part of a joint venture with WSP, and two of our senior bridge designers write about the journey in consecutive articles from the Summer 2017 edition of Aspire: The Concrete Bridge Magazine.

In the first article, “Bayonne Bridge: New Bridge Allows Larger Container Ships to Pass,” our Joseph LoBuono, major bridge technical director, and Chester Werts, senior bridge engineer, write about factors that led to the decision to keep the arch in place and raise the deck. In the second article, “Bayonne Bridge — Design and Construction Features,” they detail unique aspects that made this engineering achievement possible — and while maintaining service across the bridge during construction.

"Besides respect for tradition, you also need to think about the need for change. But how to make that change, how to make history live and at the same time point a way to the future ..." — I.M. Pei, architect who redesigned the Louvre Museum. 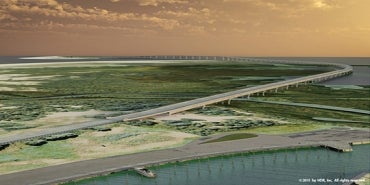 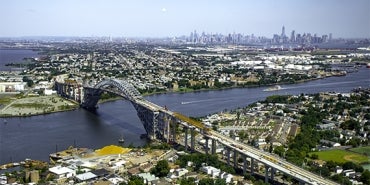