Designing a “Mixed-Use” Home for an Emerging Media Arts Center

Adaptations in Higher Education is an ongoing series of interviews with educators and administrators from around the world, representing diverse backgrounds, disciplines and institutions. These interviews examine how educational institutions are adapting to the ever-changing education landscape and how the built environment helps or hinders them in that effort.

This fall, we interviewed Megan Elliott, the Director of the brand new Johnny Carson Center for Emerging Media Arts at University of Nebraska–Lincoln. The Center’s new curriculum in emerging media arts was actually designed at the same time the building that would serve as its home was being designed and renovated.  Part 2 of our interview focuses on the inspiration behind the design of the building and the vision of it being a different type of educational facility that’s connected to both the community and the larger UNL campus in meaningful ways.

This interview is edited for length and clarity.

Blurring the Lines between Campus and Community

Mike Hamilton: How would you describe the presence that the building and the space have, relative to the identity of the program and culture that you're trying to build?

Megan Elliott: I think the porosity of this space, as it bleeds in between the campus and the city, is hugely important. The porosity of ideas and relationships is like roots and fungus and all of those good, organic things. And while this is home, the vision of the Carson Center is that it will be a network that is distributed out into the world, internationally. I think that's really important.

In designing the space, we were really inspired by Black Mountain College, a college that some of the best artists of the 20th century designed and built alongside their professors. They actually tilled the earth, grew the vegetables, and built the buildings along Bauhaus design principles. We sought to create that same sort of atmosphere on the main floor of this building — where students build their learning spaces and reconstruct that space, reconfigure that space at any time. Currently we have the first-year architecture students using the spaces downstairs and they get it immediately. They're reconfiguring their spaces three different times within their session, which is great because I think those students will model that behavior for other students to learn.

Mike Hamilton: That's great. The building sits on the southern edge of campus, on Q street — which has been described as the “zipper” between downtown Lincoln and UNL’s city campus ... a very urban part of downtown Lincoln — it has great connectivity to the city.

Megan Elliott: It’s also magical that we share it with dance. Because it's concrete and steel and raw, and we wanted it to be like that so people didn't feel that it was precious and that they can create freely and bang a hole in the wall and do whatever. You layer that atmosphere with seeing bodies in space, and I think that's going to change the work of our students because it's organic, it's intimate, it's mesmerizing. I think that if students start to see that and that comes into their consciousness, that's going to change the way they think and what they want to make.

Mike Hamilton: It’s a mixed-use building. Having multiple departments using the space simultaneously makes it a microcosm of the campus.

Megan Elliott: Yes, you see it in the way the spaces are used. Our large emerging media arts lab, which is the closest thing we've got to a sound stage here, is currently being used for improv theater as well as lighting for film, and for story lab. They’re really multipurpose, multifunctional, adaptable spaces. We don't have a typical classroom in here. We don't have a lecture theater. We don't have any of that.

We saw last night just how flexible the space is.  We wheeled everything back and then we had this flash dinner, which was fantastic. We are now working to turn that downstairs space into a completely interactive programmable immersive space using technology. The Campus as an Ecosystem for Shared Learning and Research

Mike Hamilton: How important is it that the undergraduate students have exposure to the faculties’ research activity?

Megan Elliott: One of the things that I've learned through this process is just having free and open spaces doesn't lead to creativity. If you aren’t thoughtful, it can lead to a lot of people sitting around checking Facebook. I think just expecting students to turn up and start to create is a bit presumptuous. So one thing we are exploring is turning part of this space into research labs driven by research agendas with the understanding that students need to be included in that research. In this way, the faculty can model some of the behavior that we would like to see in students.

Mike Hamilton: Each of your professors have different research agendas that can result in vastly different resource needs. Can you expound a bit on how that is accounted for in the design?

Megan Elliott: Well, one thing we do is limit the replication of resources. For example, if someone needs a soldering machine, they can use the one we already have. Everyone can use it. When we designed the building, we viewed the campus and the larger community of Lincoln as an ecosystem. We didn't replicate what is only a 12-minute bike ride away. We're sending our students out into the community where they can have intergenerational learning. They can learn from veterans. They can learn from grandmothers and people they would otherwise never meet if they were just locked down in a building.

We want them out and about, learning and meeting other people.

If I replicated the Innovation Campus inside of the Johnny Carson Center, and we had our own makerspace, that's actually subtractive from the community because we’re keeping everything close. Instead, we are buying equipment that can be housed over there, forcing us to go over there to use it. We still have some basic tools in the Johnny Carson Center for prototyping, but when we want to do really smart stuff we go over to the Innovation Campus.

At the same time, I think it's really important to have other departments find their way into the Johnny Carson Center and get that cross-disciplinary exposure as well. We've got junior and senior computer science students holding their design meetings in here this year.

Mike Hamilton: How are you building those relationships with those other colleges to get their students in here?

Megan Elliott: Coming from business and being an entrepreneur and a systems thinker, my natural inclination is to go out and meet people and build networks and ask people to write themselves into the script. So I just went out and asked. That's a great thing about being a new person — you get to go knock on the doors and see what's behind. 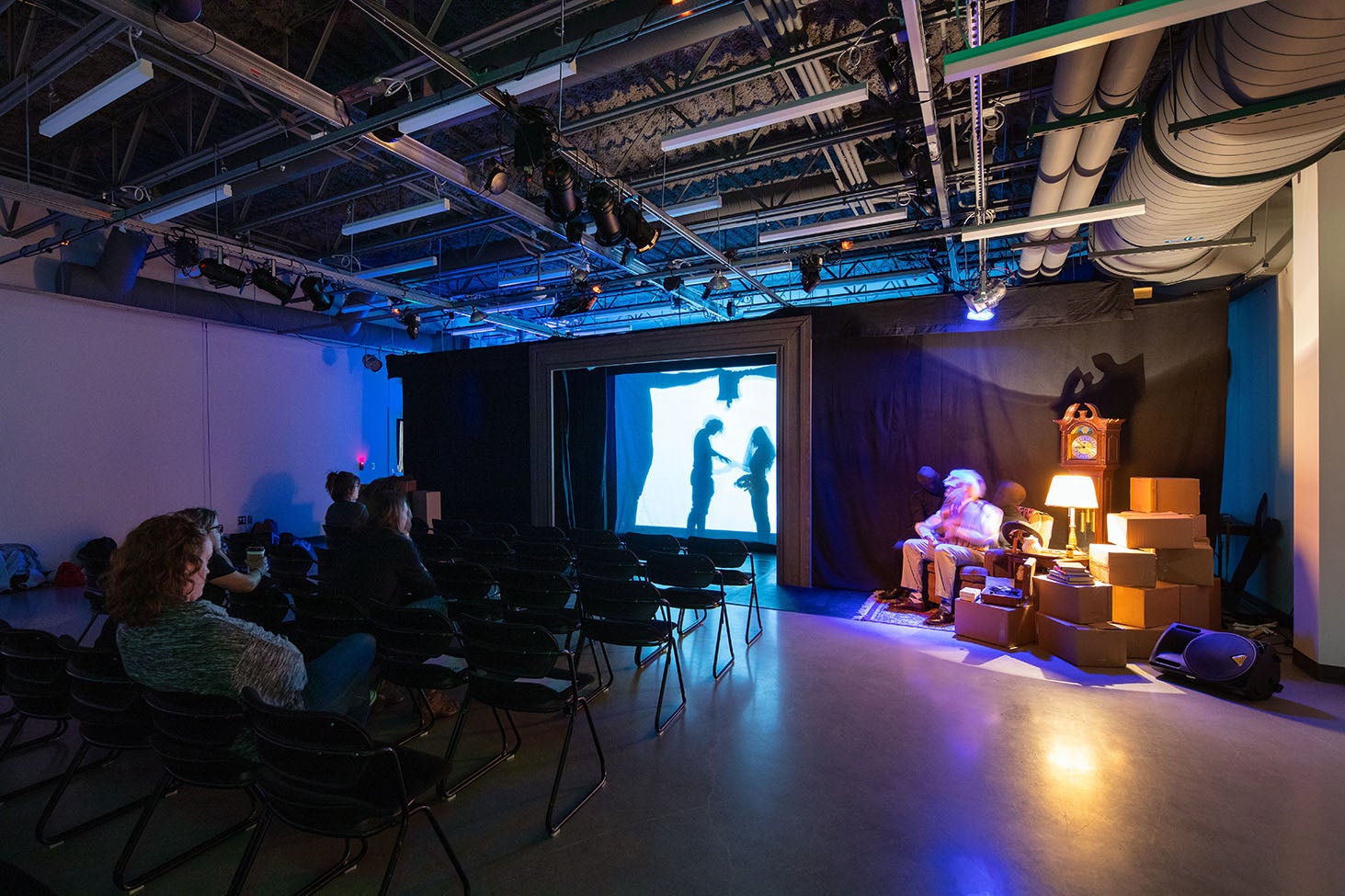 Forecasting the Future at an Established Institution

Mike Hamilton: How do you hope that your program is going to impact the University of Nebraska-Lincoln, a 150-year-old institution?

Megan Elliott: Apparently, it already is making an impact. The great thing about this building is that it has involved so many different entities from across the campus and city. Everybody's had a chance to shine and to realize their ambition. For example Information Technology Services has put more data capability into this building than anywhere else on campus — something they can point to as world-class. We've also added a stand-box network so that we can play with the internet of things, whereas in other buildings you've only got the university network and you can't do that, because it threatens data security. The notion of openness, of being student-centric, these are all things people can point to as being the way of the future.

The day we opened the doors, we also announced that we are part of the HP Educause Campus of the Future network. That means that HP is giving us access to technology to support our interdisciplinary research projects. What we learn from that will then be shared out amongst this network, which until now has basically included just Harvard, MIT, Dartmouth, Syracuse, Yale and a few others. So we're the first in the Big Ten. And what is so astonishing about that is that they gave us the designation before we'd even opened our doors, before we've even established a research agenda. We earned it simply by the idea. It’s pretty amazing. 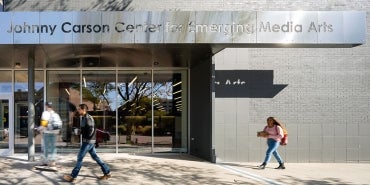 Building an Emerging Media Arts Program from the Ground Up
Article 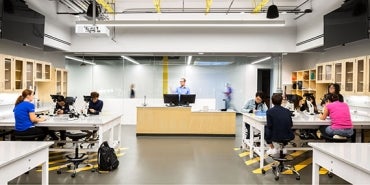 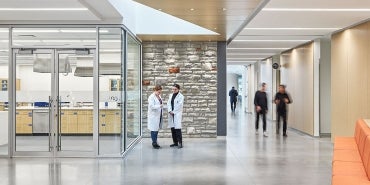 Student Leadership and Campus Life for the Century Ahead